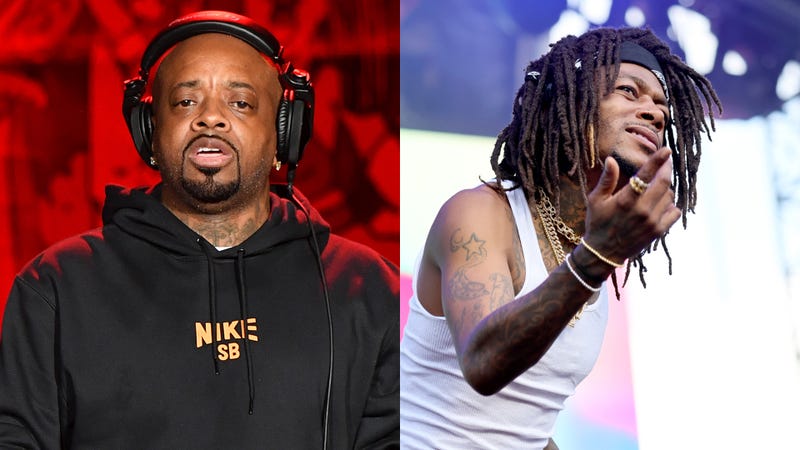 The Atlanta Falcons have a new hype song, and the internet has something to say about.

Greg Street has his finger on the pulse. Press play for all the Dirty South Hip Hop you can ask for.

Ahead of their 2022 season opener, the Falcons took to social for their usual "we back" social posts, one of which featured their brand new hype song, which according to the the internet did the exact opposite of hype.

Performed by New Jersey-based singer Rotimi, the track, titled “Rise Up,” has left fans confused for many a reason, but mostly because Rotimi is not from Atlanta.

With many prominent artists such as Jermaine Dupri, T.I., Ludacris, Migos, Future, and JID to name a few all hailing from the ATL, fans were questions why none of these or literally any other local artists were used.

"I've been living here for the last four years straight," Rotimi clarified during a call with Atlanta's The Big Tigger Morning Show on Monday. "I've got two homes here, my son was born here."

"I don't really get touched by that stuff," he shared about the reaction to the song online. "I was surprised."

Obviously Twitter did what Twitter does, and an onslaught of Falcons fans flocked to the comments section. However they weren’t the only ones, as a few of the passed up artists had something to say on the matter as well.

Trolling his hometown team about their loss to the Saints on Sunday, in relation to the hype track, JID wrote "the loss is no coincidence."

the loss is no coincidence 🥲 https://t.co/3xf0bY3rjL

While Jermaine Dupri, who’s previously provided the hype song "Welcome to Atlanta," alongside Ludacris, let a furious fan re-tweet do the talking for him.

Change the SONG NOWWWW @AtlantaFalcons
As an fan that grew here , NOT FLEW HERE . We would like to have a ATLANTA NATIVE on the opening song! MATTER FACT JUST SWITCH IT BACK TO @Ludacris AND @jermainedupri

Oh and here’s a couple fan tweets for good measure.

y’all realize there’s like a ton of amazing music artists in Atlanta rightpic.twitter.com/csg1LZt78y

Somebody need to lose they job behind this pic.twitter.com/pTMfHWDNMt