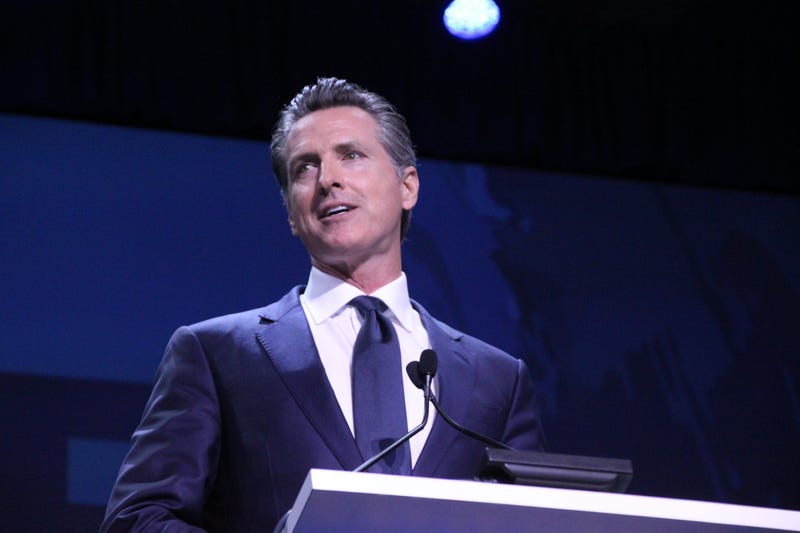 California Governor Gavin Newsom took time away from leading the state's response to the Covid-19 pandemic to speak with KCBS Radio's Stan Bunger and political reporter Doug Sovern about testing, relief, his relationship with the president and more.

Bunger: Let me start by asking you, given the fact we haven't even tested half a million Californians yet, how do we possibly get to 40 million or a big enough part of that 40 million to make a difference?

We have averaged 2,000 a day through March. We're now currently averaging 16,000 tests a day, well on our way of meeting our goal of 25,000 by the end of this month. I announced today that we were able to procure 100,000 swabs for specimen samples from the federal government. The President committed an additional 250,000 next week. That's been one of the biggest impeditors, is the specimen collections that have slowed down our capacity to increase testing. And with that being substantially addressed in the short run at least, I see our ability to get to 60-80,000 tests a day over the course of the next month or two as very realistic.

Sovern: Now Governor in New York, they're talking about an aggressive antibody testing program of 3,000 people. You said you're going to get 1.5 million serological tests donated by Abbott Labs. Can you be specific about, how is that going to be used? How will that be deployed? Who will get that antibody test so that you have a better picture of what the prevalence is and when we can reopen?

The capacity that were sent up to 130 facilities, it goes through a very prescriptive process. We have a testing task force. In addition, by the way, we made an announcement today that's even more important in terms of a pressing need from my perspective. And that's 86 mobile sites to rural California and inner cities, particularly targeting black and brown communities that have been underserved in terms of testing capacity.

But look, serological tests are important, but they're not a panacea. I think a lot of work has been done in this space in California already. You did 3,300 serological tests and surveys just up here at Stanford University a few weeks ago. USC did a smaller version of that in Southern California. But there's been a lot of peer review about them and their efficacy as it relates to determining antibodies and the like. So it's really an important space, but I don't want to overstate our capacity of understanding in the serological space just yet. So PCR tests - the traditional swab tests - maintain as the foundation of our testing regime.

Bunger: How does the realization that we had deaths occurring in California weeks before we thought we did change your thinking?

It doesn't fundamentally in this respect. I mean, we have been collecting hospitalization data, we've been collecting data on the number of people in ICUs, and death data from the very outset as a framework regardless of prevalence in the community. That's the data that, you know, is so foundational, and so it's interesting.

We have directed - by the way, we appreciate and applaud the work that they did - we've directed all the health departments go back as far as December in terms of their forensic work to make determinations. I don't think that's the last word on early diagnosis or deaths. But I think it's helpful. Just allows a broader understanding but doesn't change necessarily any of our current decision making or recent decision making.

Sovern: Governor, will we ever really know the true number? I mean, I had a neighbor who died tragically and suddenly of what we thought was the flu around New Year's, and it was baffling to everyone. And now it turns out perhaps it was coronavirus. But will we ever really know, you think, the true number of people? They may not have all the specimens they need to do the testing, etcetera?

Yeah, look, we're trying to find out, and that was a directive going back a number of weeks ago. And as I said, they're going back as early as December.

But look, what's more important at this immediate moment is to hit the crisis head on and have the kind of conversations we had with the public today about reopening the first augmentation on the stay at home order on scheduled surgeries. Because we believe we have appropriate capacity within our hospitals and alternative care sites to allow scheduled surgeries to go back and be conducted. That's a very positive thing. It’s the first sign of progress - an indicator light that went green, not red. I hope to be making subsequent announcements over the next days and weeks so that we can get back into the beginning of some semblance of normalcy

Bunger: Governor we can talk about utility bills and rent forbearance, but the lines at food banks, the numbers being run by the school lunch giveaway programs tell us this is an immediate problem for an awful lot of Californians. What would your message to them be right now?

We can't help you fast enough. Look, we've gotten $2 billion of unemployment insurance claims out the door just in the last seven days. We're dealing with unprecedented surge - over 3.2 million, close to 3.3 million people that have filed for claims just since March 12th. We're trying to help all communities documented and otherwise. We're trying to fill in gaps on childcare and support healthcare capacity for those that are uninsured.

I just - deep, deep empathy and deep understanding of the magnitude of the economic crisis. And that's why I will be meeting in the next few hours once again with my economic recovery team, some of the best and brightest minds in the country that are participating in that. We're gonna hear from Janet Yellen, former Fed chair, and Tim Cook, CEO of Apple, just as our two first presenters this afternoon about how we can really start to focus on the tools to really jump start the economy and get folks like that back to work.

Sovern: Governor, the president has been highly critical of states and governors publicly, although it sounds like you're having pretty productive conversations with him privately. And some governors push back and say, look, the president's telling us to do things but not giving us the resources we need. Do you share that point of view and is there anything that California needs right now from the federal government that you're not getting? Are you getting what we need from the feds?

I called the president, just dialed the White House today at 10:30. The President was on hold for a few minutes, was on another call, jumped on the call. I said ‘swabs’. He said, ‘what do you need?’ I said, ‘I need a quick shipment’. He says ‘I'll get 100,000 this week’. And then he paused, I paused and he said ‘250 next week and then more in the third week’. All I could tell you is what happened today, and the conversations that I have made very public in the past with the USNS Mercy and other supports that we've received. So that's the experience that I've had. It's very different for others, but all I can offer is that perspective and that insight.

Bunger: Governor, thank you for the time.

Thanks for having me on.