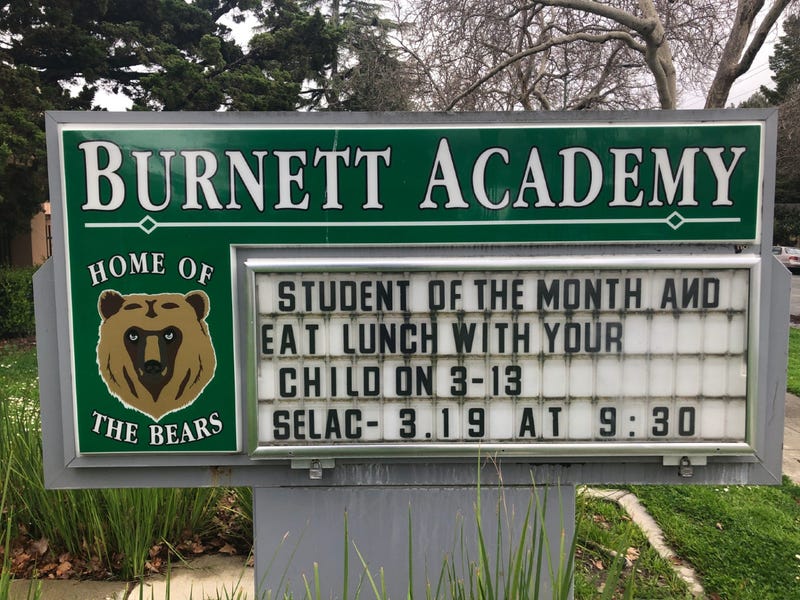 SAN JOSE -- A San Jose middle school may change its name because of its connection to California's first governor, a politician who promoted racist and xenophobic policies.

Burnett Academy is accepting suggestions for new names to make a break from its tribute to Peter Burnett, who oversaw entry of California into the Union but also said that black Americans had no place in the new state. He also worked to remove Native American tribes from California, declaring that a “war of extermination” against the tribes would not end “until the Indian race becomes instinct.” In 1880, he pushed for the Chinese Exclusion Act.

The two years he served in office coincided with San Jose's short stint as state capitol, so it might have once seemed fitting to honor him. But attitudes have changed.

“Each of our different schools have different unique names and stories, based on the different times that they opened up,” Peter Barnett Middle School’s principal, Christina Castro, told KCBS Radio. “It goes back to looking at where we are as a community, the values we have.”

“We’re trying to uplift our students and our community,” she added.

Suggestions do need to be to honor another historical figure. Castro said she'd welcome ideas that recognized the school's geographic area.

The Reverend Jethro Moore, head of the San Jose chapter of the N.A.A.C.P., said he remembers driving by the school and taking note of the name featured prominently on its sign. He pointed out the sad irony that the school sits on the edge of Japantown, near a community once known as the Tar Flats—a predominately African-American community.

“It’s about time that we have historical names… that represent a positive change, or the growth of American history as an inclusive society,” said Moore. “Peter Burnett belongs in a history museum as a part of American or California history that we want to make sure we do not repeat.”

It was not his views on race, sadly commonplace in the 19th century, which led to his unpopularity and abrupt resignation after just over a year in office. The aloof Burnett lacked support in the state Legislature, and he made few allies by trying to stop legislation to make Los Angeles and Sacramento the state’s first incorporated cities.

In this century, the failed governor has even fewer friends left in the state he helped to found—a pre-school in San Francisco dropped Burnett’s name in 2011.

The Dixie School District in San Rafael has recently been wrestling with what critics say is a racist name honoring the Confederacy while supporters believe it is name for a woman who lived in the area.

Peter Burnett Middle School, as it’s still known for now, is taking suggestions for a new name on its website through Monday.

news
11 travel accessories to keep you comfy and organized on your next trip
sports
Nancy Pelosi tweets photo with Giants legend Willie McCovey on Willie Mays' birthday
music
Chris Martin on new music from Coldplay: 'We were just throwing away any concept of limitation'
music
The 'Riverdale' cast, ranked by net worth
news
Applebee’s is sticking with a smaller menu - Here’s what staying and going
music
Jessica Alba makes $122 million in one day after The Honest Company goes public