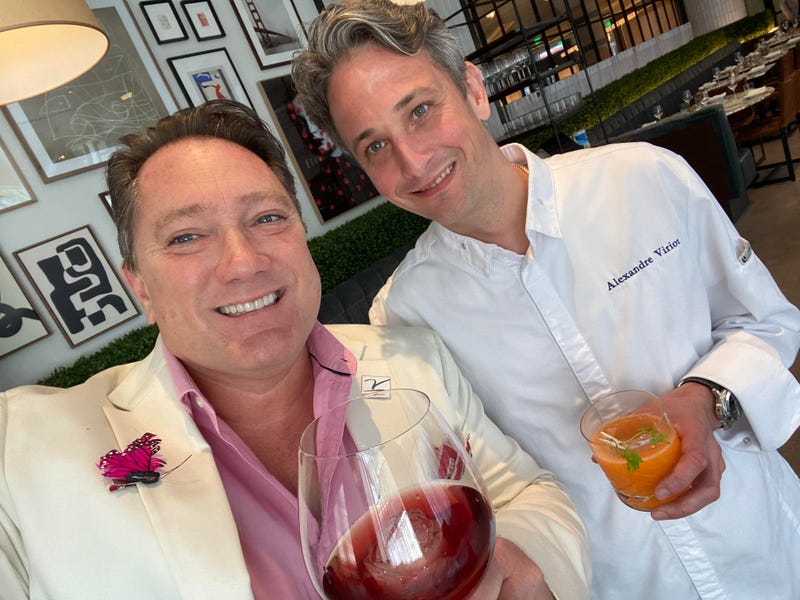 THEATER: MOULIN ROUGE
From the silver screen to Broadway - Moulin Rouge has can-canned its way to San Francisco’s Orpheum Theater. This two hour in your face, non-stop musical romp delights in many ways. Great sets, innovative twists on popular music. The cast is stellar, Conor Ryan delivers as Chritian but it’s Andre ward as La Trec who steals every scene. This love story by way of Paris is a must see. Head to the website for tickets.

EAT HERE: LA SOCIETÈ CAFE
There is a new tasty spot to hang in downtown San Francisco - a taste of France at La Societe Cafe on 3rd Street near Market Street.

This yummy dish is the moules and frites - mussels if you will in a terribly tasty saffron sauce . That’s the rock star chef Alex Viriot.

Treat yourself for an intimate dinner, solo hang or get a group together for a fun night out. The cafe is open Tuesday through Saturday from 5 p.m. to 9:30 p.m. My foodie Friday pick is La Societe Cafe in SF. Enjoy my tasty chat with rock star Chef Alexandre Viriot here.

MOVIE: A JAZZMAN’S BLUES
Tyler Perry's tale of forbidden love and family drama unravels 40 years of secrets and lies against a soundtrack of juke-joint blues in the Deep South.

At its core, “A Jazzman’s Blues” is a soap opera full of shocking secrets, emotional confrontations, and one exceedingly satisfying slap. The mystery aspects are thin; anyone with passing knowledge of Black American history can infer early on who was killed, why, and by whom.

The pain of those times plays out by way of a beautiful , heart-tugging jazzy score. Available to stream on Netflix.

PLAY: TO KILL A MOCKINGBIRD
Harper Lee’s “To Kill A Mockingbird” adapted for the stage by Aaron Sorkin is now playing at the Golden Gate Theatre. This iconic story pulls you in and has you hanging on every single word. It stands the test of time, as relevant today as it was when written in the 1960s civil rights era.

The S.F. production lived up to the Broadway hype as it was engrossing, and provocative with a stellar cast led by Richard “John Boy” Thomas, who is simply brilliant as lawyer Atticus Finch. The entire cast shines with: scene stealer Melanie Moore as Scout Finch, Yaegel T. Welch is compelling as Tom Robinson and  Jacqueline Williams is a powerhouse as Calpurnia. All richly deserved the five minute standing ovation as the curtain fell last night  in this gripping  BroadwaySF production. Mocking Bird runs at the Golden Gate through October 9. You should run now and get tickets.

SAVE THE DATE: FLEET WEEK
Held annually between the Golden Gate Bridge and Alcatraz, The San Francisco Fleet Week Air Show presented by United Airlines attracts fans from all over the globe. The waterfront event is headlined by The U.S. Navy Blue Angels and is the only air show in the United States with a commercial airliner, the United 777, to perform a fully choreographed act. Fleet Week is October 3 to 10.