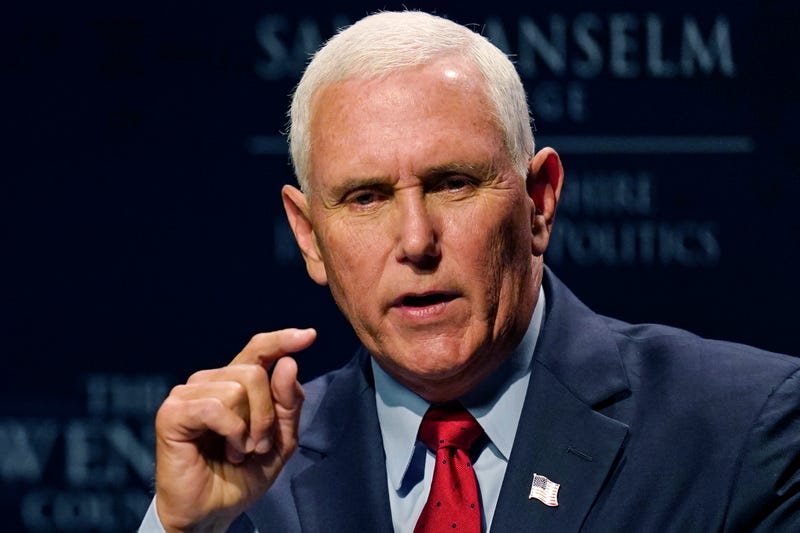 MANCHESTER, N.H. (AP) — Former Vice President Mike Pence on Wednesday implored fellow Republicans to stop lashing out at the FBI over the search of Donald Trump’s Florida home and denounced calls by some of the former president's allies to defund the FBI, saying that was “just as wrong” as a push by Democratic activists to shift money from police.

Pence also said he would give “due consideration” if asked to testify before the House committee investigating the riot at the U.S. Capitol on Jan. 6, 2021.

His pleas for restraint come as law enforcement officials warn of an escalating number of violent threats targeting federal agents and government facilities since agents last week searched Mar-a-Lago as part of the Justice Department's investigation into the discovery of classified White House records recovered from Trump's estate earlier this year.

Speaking in New Hampshire, Pence said he has been troubled by what he called the politicization of the FBI. He also said the Justice Department and Attorney General Merrick Garland should be more forthcoming about what led authorities to conduct the search.

But Pence, who is trying to stake out his own political path as he and Trump both consider 2024 presidential campaigns, also had a message for the GOP.

“I also want to remind my fellow Republicans, we can hold the attorney general accountable for the decision he made without attacking the rank-and-file law enforcement personnel at the FBI,” he said at the Politics & Eggs event, a breakfast gathering at St. Anselm College for business leaders that has become a customary stop for White House hopefuls in the early-voting state.

“The Republican Party is the party of law and order,” Pence continued. “Our party stands with the men and women who stand on the thin blue line at the federal and state and local level, and these attacks on the FBI must stop. Calls to defund the FBI are just as wrong as calls to defund the police.”

Trump and some other Republican lawmakers have tried to capitalize on the search by portraying it as an act of political persecution and an attack on the rule of law.

For the onetime political allies, their paths diverged on Jan. 6, 2021, when a mob of angry Trump supporters stormed the Capitol in an effort to stop Congress’ formal certification of Joe Biden’s presidential victory. Trump denounced his vice president, who was presiding over the Senate, for refusing to object or delay the certification — something Pence had no power to do. A fake gallows was constructed on the National Mall, and people who broke into the Capitol chanted, “Hang Mike Pence! Hang Mike Pence!"

Before Wednesday, Pence had refused to say whether he would engage with the House committee investigating the insurrection if the panel requested his testimony.

“If there was an invitation to participate, I would consider it,” Pence said, adding he would first reflect “on the unique role” he was serving as vice president.

“It would be unprecedented in history for a vice president to be summoned to testify on Capitol Hill, but as I said, I don’t want to prejudge,” he said. “If ever any formal invitation was rendered to us, we’d give it due consideration.”

The committee and Pence’s team have had an open line of communication since Pence's former chief of staff, Marc Short, agreed to testify in private in December 2021 after receiving a subpoena. Short was at the Capitol on Jan. 6 and accompanied Pence as the then-vice president fled the Senate chamber and hid from rioters who were calling for his hanging.

In Short's recorded testimony, aired at the committee's public hearings this summer, he described attending White House meetings before the insurrection during which Trump allies discussed ways to overturn the results of the 2020 election.

At one point, Trump had banned Short from the White House grounds because Short objected to the pressure on Pence to reject the legitimate election results.

Committee members so far have not decided to seek Pence's testimony, saying that Short and former Pence lawyer Greg Jacobs have provided investigators with plenty of evidence.