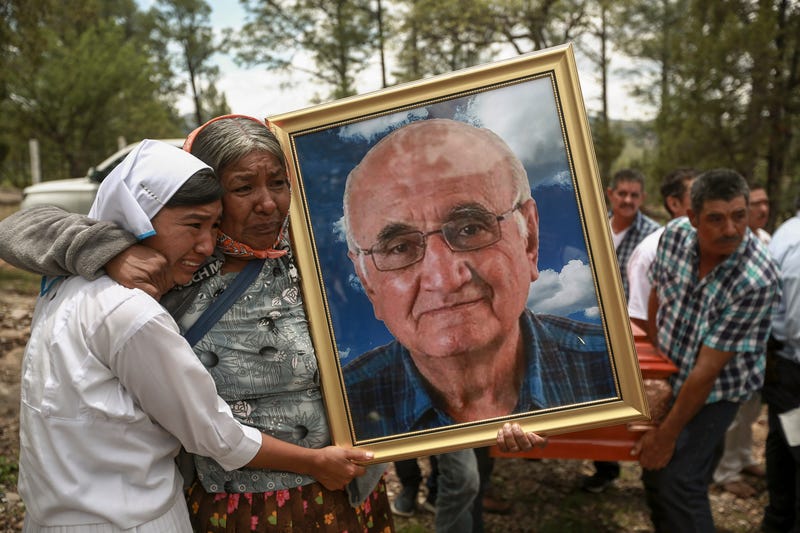 CEROCAHUI, Mexico (AP) — Two Jesuit priests killed last week in remote mountains of northern Mexico were buried Monday in the lawn of the church where a gunman attacked them last week.

The Revs. Javier Campos, 79, and Joaquín Mora, 80, had spent much of their lives serving Indigenous Raramuri people of the region. On Sunday, their friends, colleagues and parishioners mourned the priests’ return to Cerocahui in wooden caskets.

Last Monday, a local crime boss pursuing a tourist guide who sought refuge in the church facing Cerocahui’s central square, killed the guide and the two priests. Their bodies were initially taken by their attacker, but were recovered days later.

The attack has drawn strong criticism from the Roman Catholic church to Mexico’s security situation and the federal government’s strategy.

Organized crime has a firm hold on communities in the Tarahumara mountains of Chihuahua state, where they support illegal logging, extory money from local businesses and grow marijuana and opium poppies. Colleagues said Campos and Mora provided a moral balance in the marginalized communities controlled by gunmen.

In a Mass Saturday for the priests in the state capital Chihuahua, Rev. Javier Ávila, referenced President Andrés Manuel López Obrador’s saying of “hugs not bullets,” lamented that “there aren’t enough hugs anymore to cover the bullets.”

From there, the caskets made their way up the winding roads into the mountains where the priests had worked for decades among the impoverished Raramuri. They were buried later Monday in Cerocahui on the grassy lawn of the church, amid shouts of praise from parishioners.

The leader of the Jesuit order in Mexico, Rev. Luis Gerardo Moro, pledged during the funeral Monday that the Jesuits will not be frightened off. The order has been active in the Tarahumara mountains since the 1600s.

“We are not leaving here,” Moro said. “We want to continue here near you, learning from you.”

Yolanda Torres, one of the mourners who attended the funeral Monday, said “all of us in the Tarahumara mountains, we are very, very sad, very upset ... we are here, united in grief.”