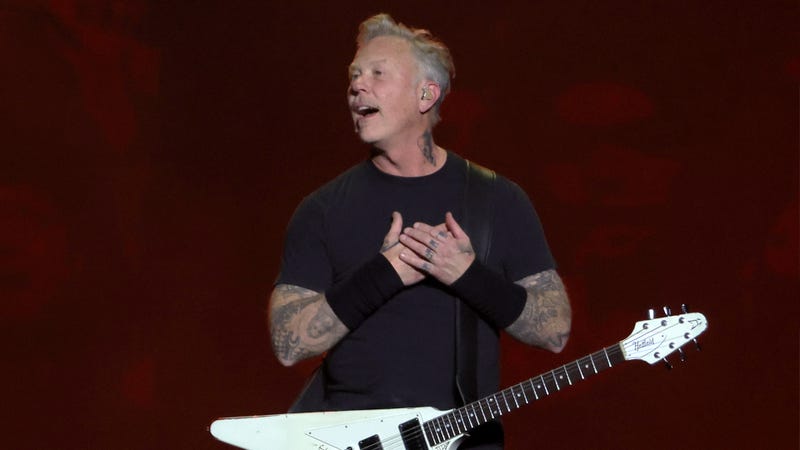 During a recent Metallica show in Brazil, James Hetfield shared an emotional moment with the crowd and his bandmates, admitting insecurities about his age when it comes to his performing abilities.

In between performances of “One” and "Sad But True," Hetfield stopped to speak to the crowd. First about needing a “Metallica birthing section" at their shows, “especially in Brazil,” following a fan giving birth during one of their shows. Then a vulnerable admission from James.

“I’ve gotta tell you, I wasn’t feeling very good before I came out here. Feeling a little bit insecure, like I’m an old guy, can’t play anymore, all this bulls**** that I tell myself in my head,” James admitted. “So I talked to these guys, and they helped me, as simple as that. They gave me a hug and said, ‘Hey, if you’re struggling onstage, we’ve got your back.’ And I tell you, it means the world to me.”

The icon’s words became reality as he was quickly comforted with a group hug by his bandmates; Lars Ulrich, Kirk Hammett, and Robert Trujillo. Tearing up as he continued to talk, Hetfield now speaking to the crowd directly said, “and seeing you out there, I am not alone. I am not alone. And neither are you.” Check out fan recorded footage of the moment above.

Hetfield pretty much nailed it, if we do say so ourselves. Similar to his sentiments Audacy's I’m Listening initiative aims to encourage those who are dealing with mental health issues to understand they are not alone. If you or anyone you know is struggling with depression or anxiety, know that someone is always there. Additionally, the National Suicide Prevention Lifeline is available 24 hours a day, 7 days a week at 1-800-273-8255.