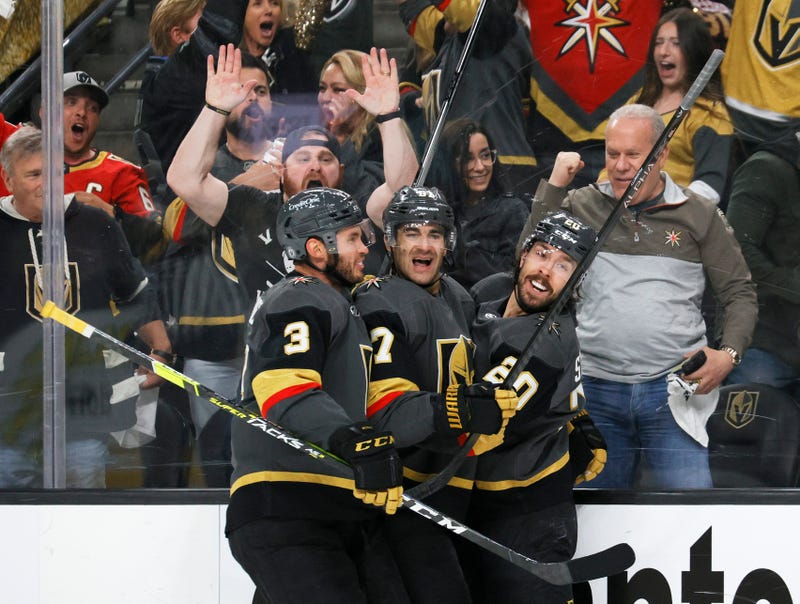 On Sunday, May 30, the Golden Knights were beaten 7-1 by the Colorado Avalanche. They lost Game 2 in OT, 3-2, on Wednesday June 2. Five days and two games at a full capacity T-Mobile Arena later, the series is now tied at two games apiece. As the Golden Knights and Avalanche head back to Denver for Game 5 and what is now a best-of-three series, now seems like an excellent time to reflect on what’s working, who’s struggling, and where this dance of intertwined destiny is headed. From my crease, here’s what I’m seeing:

With momentum this breakout option is deadly. You’d be surprised how much better people are contorting their bodies around others on a relentless forecheck with blood in the water. The name of the game within the game is to not get trapped in your defensive zone. When I played junior hockey, we used to play link tag - essentially a play on cat-and-mouse, where the mouse looks for shelter by linking arms with one of the stationary pairs of people scattered about. Being the mouse is simple because you are looking for a place of relief that’s readily available to you. The cat gets no such advantage. There is nothing worse than being the not-so-fast-kid who gets stuck chasing their fourth “mouse”. The stride shortens, the bursts of effort are fewer and further between, until ultimately someone takes pity and defers the responsibility, or a mouse willingly gets caught. When the Golden Knights are playing their game, (which they have done basically since the second period of Game 2) their ability to scramble through the neutral zone and get the positional physical leverage is what enables them to more often than not collect the bouncing pucks falling from the sky. The Avalanche defensive core is certainly dynamic and dangerous, but they are equally just as vulnerable to getting pushed around and back into chasing. The breakout play out of the defensive itself is what starts tilting the ice - you know because the puck isn’t spending a lot of time down there - but the swarm gathering of the puck is what sets the slope difficulty. Success at getting the puck out makes it a blue square run, but when you essentially are catching your own passes like the recess hero who always won 500, that level of dominance is a black diamond.

2. Collapsing on the wings (aka first pass outlets) on the Avs breakout

a. The bedrock of success since the inception of the Golden Knights has been their forecheck. Anybody can forecheck hard. But it’s one thing to forecheck hard, and it’s quite another to forecheck well. Lately the Golden Knights have been wreaking havoc on the Avalanche’s talented, but inexperienced defensive core. Their top defensive pair, Devon Toews and Cale Makar, are 27 and 22-years-old respectively. Second pair, Samuel Girard and Ryan Graves? The year Graves was born, Tom Hanks took home the Oscar for Best Actor in Forrest Gump (1995) and Girard has never known the world before the "was there room for Jack Dawson on the door with Rose" as the Titanic sank debate (1998). Patrick Nemeth on the third pair is the elder statesman of the group at 29-years-old, with Connor Timmins who at 22 years of age amassed just 33 games in his NHL career who usually plays around 10 minutes a night during this playoff season. On Sunday, he played nearly 18 minutes.

b. The Golden Knights have effectively taken away the wing outlet option on the halfwall from the Avs on their breakout. They’ve pinched down with pressure and are either coming up with the puck, or at the very least disrupting it’s path enough where the Avs have to battle for possession and regroup all within the area of ice below the tops of the circles on the wall. That’s a really tough place to get knocked off your axis, let alone recover in time to defend their opposition. I cannot oversell how demoralizing it is when your team cannot buy a breakout. It’s one thing when it’s a result of your own ineptitude (aka shoveling it up the wall again and again until it works) but when your opponent is all over it and feasting on it - borderline impossible to get out of a rut like that without some dinky fluke goal or something springing your teammate on a breakaway as they were getting out of the box. Breakout passes are one of those things that can be automatic, but right now the Avalanche are being forced to micromanage their decision making. Any time you get a team thinking about how they are playing rather than the gameplay itself is a win in my book.

3. Utilizing the wing options on the PP

A Martinez PP goal, Marchessault’s PP goal. Not only are the Golden Knights flexing their offensive depth by spreading the power play goal wealth around, they’ve been more malleable and creative in their set ups. The cross ice option to Pacioretty that worked so well for much of the season also put them in the box during their cold streaks. This coincided with the early season four game series with the Avalanche that included the Lake Tahoe game. The Golden Knights have diversified their power play portfolio by feeding the weakside wing from the puck moving defenseman at the point. It’s not like the option wasn’t there before, it just wasn’t one they were dedicating intentional looks to. Now they are and they’re being rewarded for it. Just as B.F. Skinner taught us, if we are rewarded for certain actions, we naturally gravitate to repeat it. Repetitive intentional creativity is a mindset not a result. The Golden Knights are mixing it up and playing well. Or is it that they’re playing well so they’re more likely to mix it up? Does it matter either way? What does matter are the results, as it becomes easier and easier to play with creative freedom, like a mental decongestant. And the best thing is that decongestion, just like any momentum generated on the power play, carries over to your overall team game and individual confidence. The Golden Knights are a team that can easily be put into a box offensively. It’s never a question about the quantity, but that of quality. Variation is the key to diversity not predictability. It’s easy to keep going back to the well that always provides water, but where the Golden Knights have struggled this season is when everyone else figured out which (a one timer to the mid-to-high short side from the knee from the right side faceoff dot) well they were frequenting. With the Golden Knights more willing to dish to whoever and whenever at any particular time, it not only makes them difficult to cover and makes it difficult to take away their shooting lanes effectively. More people involved means more good vibes. Spread the wealth, no matter what Adam Smith says.

4. Forcing the Avs stars into their Plan B

The simplest pleasure in life for me is the element of surprise. I wouldn’t call Alex Pietrangelo’s play in recent weeks a surprise. We are all very familiar with his resume, as we are that of one Mr. Nathan MacKinnon. The guy is an absolute specimen with singularly elite skills and tools at his disposal, right up there with the McDavid's and Matthews’ and Crosby’s of the world (note: all were eliminated in the first round). Skill doesn’t win playoff series though, hell even “grinding one out” sometimes isn’t enough, but don’t tell the Montreal Canadiens that. More often than not, the team that finds their identity first and imposes their will on the game the longest is the team that walks out with a &quot