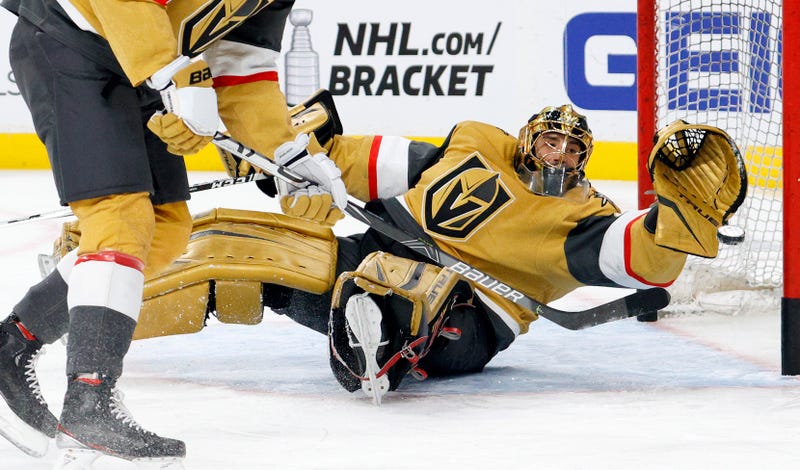 Instead of asking what I don’t know about the Vegas Golden Knights as they stand on the precipice of the postseason, I’ve decided to write about what I DO know about them. Most people look at square footage, I’m looking for the writing on the wall. Here’s some of what the walls have been telling me:

1. VGK can be vulnerable in slot, especially when play originates from below the goal line.

There’s a heavy traffic cone vibe in this area of the ice for the Golden Knights. They have a tendency to get mesmerized by activities conducted below the goal line, be that the puck itself or the 50/50 battles along the boards. When the battle is won and the puck gets sent to the front, it’s almost like it takes whoever is (supposed to be) covering by surprise. All you need is a split second of a step or apprehensive thought to win the play and beat your mark. The D/C/weakside wing tasked with covering that area needs to have their head on a swivel for crashers sniffing for a one timer or finishing a rebound that pops past the first layer of garbage collectors. Or you could just avoid this situation all together by getting the puck above the goal line before the first forecheck initiates physical contact with the puck carrier.

Quick breakouts are the best way to prevent getting trapped in your own defensive zone. It’s about the D recognizing where the pressure is coming from and collecting/dishing basically all in one motion. But it’s not all on the D. The wingers on the wall or the center swooping low as an option are where this battle is won and lost. If they’re not ready for the pass body position wise, or too antsy from potential pressure from a pinching D, that puck is going to be coughed up. Lots of little things have to fall into place on every rep on every breakout and we haven’t even touched on how affected decision making is on individual and team confidence. When in doubt, chip it out … that’s how I coach em’ up when dealing with a smothering forecheck such as…

2. VGK can be easily trappable to below goal line play with a heavy 2-1-2 forecheck.

It’s the most standard forecheck in the game. F1 goes hard into initial puck battle to pin the D, F2 collects the puck from the pin or supports the battle, and F3 chills in the slot and shifts to strong or weakside of the battle depending on what happens with F2. Forechecking with that level of hustle and commitment requires just as much mental energy as it does physical. Depending on how the game unfolds, it isn’t always possible let alone efficient to allocate your energy to that strategy. But it’s a worthy cause and an operation that can run itself. If you create enough chaotic energy in the Golden Knights’ D zone, THEY go with YOUR flow instead of dictating their own.

3.  VGK prioritizes blocking shots/being loose to turn up ice over tying up bodies in front.

a. Blocking shots is all fine and dandy as long as you (ALWAYS) get a piece of the puck and you don’t take yourself too far out of position in a micro must win scenario. Just like anything in life, intention does not guarantee result. The more players get out of position, the more chaotic the defensive zone gets as opposing players find open space and extra opportunities to keep the play/possession alive.

b. The Golden Knights currently dedicate $12 million dollars of cap space to All-Star caliber goaltenders - 14.7% of the teams cap. As a goaltender myself, I’m going to let you in on a secret: we like being hit with pucks. I’m not saying never block shots, but opting to sell out for the shooting lane to save our goalies from the pucks they are paid to (and love to) stop is straight up not the best utilization of hockey resources. Taking the puck is the goalie’s responsibility, hence, the big expensive pads. Taking the body is the skater’s responsibility, that’s what the hockey butts are for. Hold yourself to be situationally aware and accountable to the mark rather than their will. Preventing your opposition’s ability to finish rebounds should be the priority because we trust our goaltenders to make the first save.

4. Alex Tuch can will himself to make one of the hardest plays in hockey on a shiftly ba