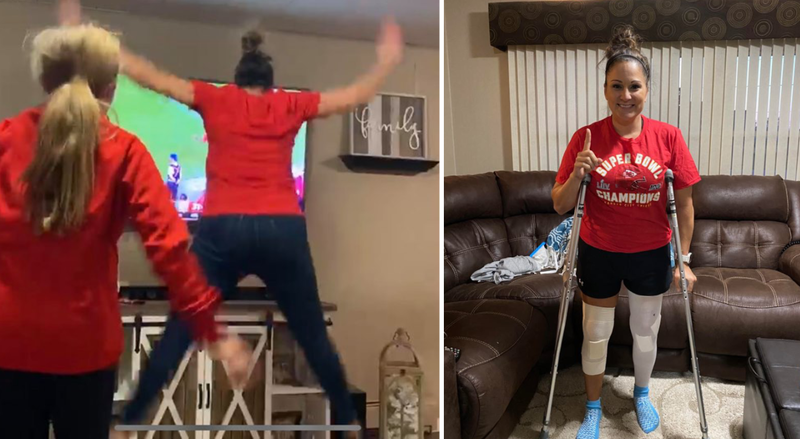 Kansas City, MO - It's been more than four months since the KC Chiefs won the Super Bowl and one die-hard fan is still recovering.

It's not from a months-long hangover or from a lingering haze from the sheer amazement of the win, rather Crystal Tipton is recovering because as she jumped for joy... she badly injured her knee.

KMBZ hosts Dana and Parks spoke to Tipton by phone.

“I’ve never felt anything like that", says Tipton. "I knew the very instant it happened, I said to my husband, ‘something’s wrong, something’s really wrong.’”

Tipton is currently a teacher and softball coach in central Illinois. She lived in the KC Metro for several years.

She and her family watched the Super Bowl at home.  As the clock ticked down to zero and the Chiefs victory was now a sure thing after a 50-year drought - she leapt into the air.  Her kids leapt too.  Chiefs fans across Kansas City and around the world leaped, jumping and bounding delirious with joy.

But when Tipton came down... “My foot stuck, my knee buckled, and I was on the floor.”

The landing from the leap tore her ACL and she suffered a meniscus tear as well.

FINALLY on the road 2 recovery.Tore my ACL & Meniscus jumping up as the final secs.ticked off the clock and the @Chiefs won the Super Bowl. Waited 4 mos to wear Championship gear, it was bittersweet,and I have a long way to go, but we’re SB CHAMPS #@PatrickMahomes #chiefskingdom pic.twitter.com/h6wlJTpbP5

Now more than four months later, she's still in recovery from surgery to repair the knee. To fix her ACL, surgeons took a piece of tendon from the other leg.

“So yeah, both legs are completely out of commission right now," she says.

She's doing well, but says a full recovery is about nine months.  She's halfway through.

However, that recovery timeframe puts her right into the middle of what she says will hopefully be another winning Chiefs season (ed. if they play).

But this time when the Chiefs win, Tipton says she's sticking to the couch.

sports
Kris Bryant supports crackdown on sticky stuff: 'We were so stupid as hitters'
music
The Game puts his kids on blast for forgetting Father's Day: 'It's the disrespect for me'
music
Did Kacey Musgraves' new man just make them Instagram official?
music
Elton John reveals where he'll play the final US show on his 'Farewell' tour
sports
Master P as Pelicans' next coach? He wants it, and 'Zion will be happy'
music
Britney Spears to address judge in conservatorship case today