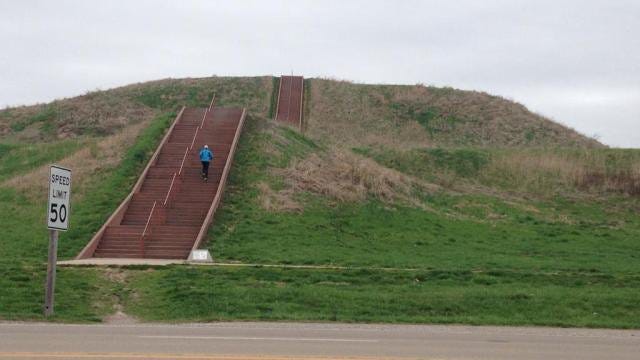 The Cahokia Mounds and Mississippian Culture National Historic Park would include mounds in Madison, St. Clair, and Monroe counties, as well as Sugarloaf Mound in St. Louis. The park would be jointly managed between the park service and local stakeholders.

“Cahokia Mounds is a significant archaeological treasure,” Bost says. “Southern Illinois was once home to one of the largest civilizations in what is now the United States, and Cahokia was the center of this ancient civilization. Making Cahokia Mounds and associated mounds sites in the region part of our national park system will help elevate this resource in our nation’s consciousness and deepen our understanding of the peoples and cultures of our past. I appreciate the dedication of HeartLands Conservancy and all of the state and local leaders who helped make this effort a reality.”“The Mississippian Culture, with Cahokia Mounds as its hub, was once the largest urban center in North America. Many Native American nations and tribes have origins in the Mississippian culture, and their stories and heritage must not be forgotten,” said Mary Vandevord, President and CEO for HeartLands Conservancy. “Thanks to the leadership and tremendous political support of Congressman Bost, along with Congressmen Clay, Davis, and Shimkus and Senator Durbin, the State of Illinois, and the efforts of Native American tribes and nations, archaeologists, communities, and partner agencies and organizations across the country, we are one step closer to elevating and preserving Cahokia Mounds and other mound groups of the Mississippian Culture for people to experience now and for generations to come through this bistate national historical park.”

The remains of the most sophisticated prehistoric native civilization north of Mexico are preserved at Cahokia Mounds State Historic Site, according to the Cahokia Mounds website. Within the 2,200-acre tract, located a few miles west of Collinsville, Illinois, lie the archaeological remnants of the central section of the ancient settlement that is today known as Cahokia.