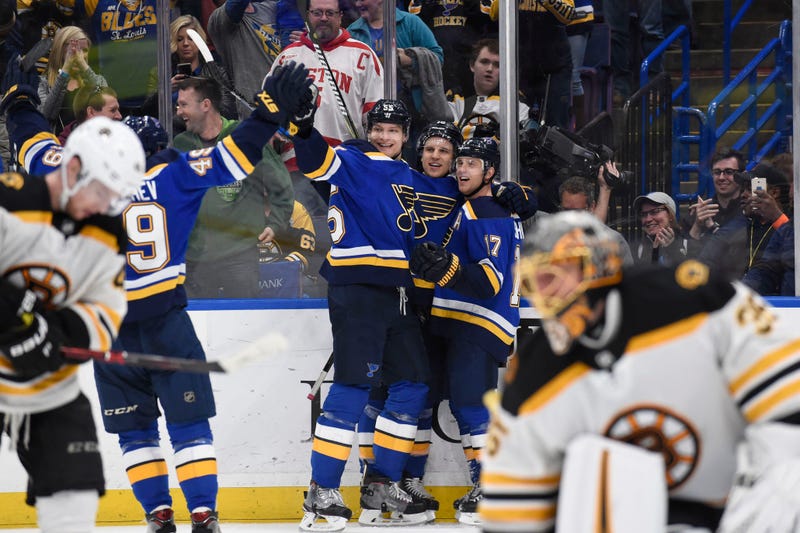 Jimmy Fallon and Drew Barrymore, running on the field.

"Lonborg and Champagne." Oh, wait... that one didn't happen.

Yes, before Game 7 of the 1967 World Series, a Boston newspaper famously had that headline across the front page, referring to Red Sox starter Jim Lonborg and a certain beverage to be popped. Cardinals starter Bob Gibson and his teammates didn't take too kindly to that ink, and proceeded to blast Lonborg (Gibson was one who homered off him) in a 7-2 victory at Fenway Park. It's the last time a St. Louis team beat a Boston team in a championship-clinching game.

Sunday, that could all change.

The Stanley Cup is in St. Louis, waiting at Enterprise Center, ready to be carried onto the ice by the men with white gloves. It can only go to one team after Game 6, with the Blues leading the Stanley Cup Final, 3-2. Imagine that for a moment. 52 years of frustration, year after year of playoff misses, and perhaps the hardest trophy to win in sports is quite possibly 60 minutes away.

It was in Boston in 1970 when Orr scored 40 seconds into overtime of Game 4, diving through the air and sweeping the Blues for the Cup, their third straight Stanley Cup Final of their existence. They hadn't returned until this year.

It was in New Orleans in 2002 when Adam Vinatieri kicked a field goal in overtime, giving Tom Brady his first Super Bowl win with the Patriots. We found out later, of course, that coach Bill Belichick and his staff had been accused of secretly videotaping the Rams' walkthrough practice. Would it have been two Super Bowl titles in three years for St. Louis? Would the Rams still be here? We'll never know.

It was in St. Louis in 2004, after a pennant-winning season of 105 wins and MVP candidates galore, that the Cardinals met their match and then some... the Red Sox swept the series for their first world title since 1918. Fallon and Barrymore, shooting the movie Fever Pitch, used the opportunity to tromp around on the Busch Stadium grass in glee.

Alas, the pain of that loss went away when the Cards won it all two years later, in 2006.

The Cardinals then won their 11th world championship in 2011.

And then there was 2013, when Ortiz swatted home runs in Games 1 and 2 of the World Series, batting .688 against the Cardinals to win in six games. Big Papi was named World Series MVP. The Cards have not returned to the Fall Classic and the Red Sox have been the team of the century so far, winning four titles since '04 and boosting their total to nine, just two behind St. Louis.

It's been about 15 minutes since Boston threw a victory parade. The Red Sox are the defending champions. The Patriots (THANK YOU!) beat the Los Angeles Rams in this year's Super Bowl. Boston has owned this decade and last and have a right to call themselves "Titletown." The Bruins haven't won the Stanley Cup since 2011, but are a win away from having that chance at home.

This Blues team, which might have been a bit overlooked coming into the series, can put an end to all of that Sunday with one more physical, bruising, opportunistic victory. A goaltending display from Jordan Binnington would be right on cue, but his teammates must play well in front of him. The Bruins will be desperate and certainly looking to do what they did to the Maple Leafs in the first round, returning home for a triumphant Game 7 after being down 3-2 on the road. It would be a relief for a city on the ropes.

If the Blues win, however, the emotional release will be extraordinary in downtown and the far reaches of the counties surrounding St. Louis, a proud sports town. You could make the case that there isn't a city in America that gets more of an emotional (and economical) lift from the success of its professional sports teams than St. Louis does. The mid-size, Midwestern market loves to talk about itself... and uses national coverage as a vehicle to promote its sports-centric lifestyle (and delicious, sometimes quirky, style of food and beloved restaurants).

St. Louis is bursting at the seams, ready to have their turn in the spotlight once again.

Boston, you may or may not have seen us coming.