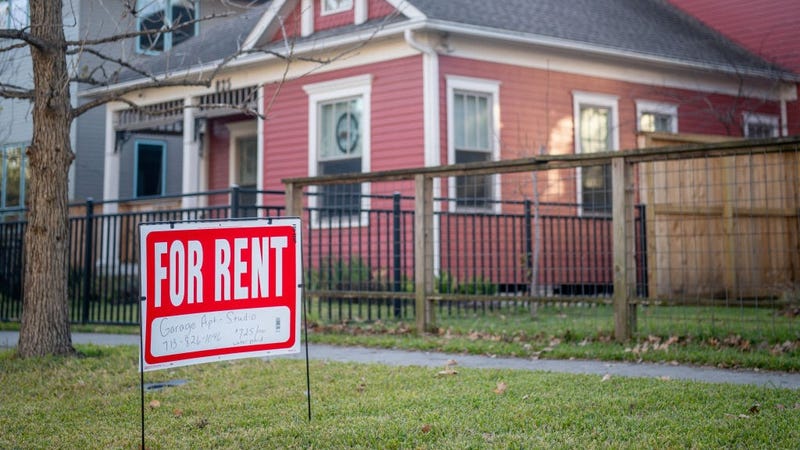 HOUSTON, TEXAS - FEBRUARY 07: A 'For Rent' sign is posted near a home on February 07, 2022 in Houston, Texas. Photo credit Brandon Bell/Getty Images
By Colin Martin, Audacy

The National Low Income Housing Coalition (NLIHC) recently published its annual report "Out of Reach 2022: The High Cost of Housing" that showed the disparity between a minimum wage worker's income and how much it costs to rent a one or two-bedroom home throughout the United States.

"Out of Reach 2022 finds that in no state, metropolitan area, or county can a full-time minimum-wage worker afford a modest two-bedroom rental home, and these workers cannot afford modest one-bedroom apartments in 91% of U.S. counties," the NLIHC said in a press release.

The report then calculated a "housing wage" that a full-time worker should earn to be able to afford a rental home without spending more than 30% of their income. They determined a person should be making $25.82 per hour to afford a modest two-bedroom home, or be making $21.25 per hour for a modest one-bedroom home.

Puerto Rico had the lowest housing wage at just $9.66 per hour to afford a two-bedroom home, while Arkansas had the lowest in the contiguous U.S. at $14.89 per hour, and West Virginia was not far behind with a housing wage of $15.38 per hour. Minimum wage workers in Arkansas would need to work 54 hours per week to afford the rent of a two-bedroom home.

The NLIHC showed the housing wages required to afford a two-bedroom home in each state, including Washington, D.C. and Puerto Rico. Hawaii had the highest housing wage at $40.63 per hour, followed by California at $39.01 per hour. A minimum wage worker would need to work 104 hours per week in California to afford rent for a two-bedroom home, as the minimum wage is $15 at most employers.

States that fell in the middle with their average housing wage included Utah ($22.18 per hour), Minnesota ($22.41 per hour), and Texas ($22.54 per hour). A minimum wage worker in Texas would need to work 124 hours per week with their federal minimum wage rate to afford a two-bedroom home.

"These rent increases have been widespread: out of 345 metropolitan counties, all but two have seen a rise in rental prices since 2021," the NLIHC said. "With rents skyrocketing and prices for goods increasing, workers may have to sacrifice necessities like food, medical services, transportation, and childcare simply to remain housed."

Rep. Maxine Waters (D-CA), Chairwoman of the House Committee on Financial Services, wrote the NLIHC report preface and said in a statement that she is doing all she can to address the country's "affordable housing crisis."

“As Chairwoman, I have worked tirelessly to address our country’s affordable housing crisis that has left millions of families living on the cusp of eviction or, in worst cases, experiencing homelessness," Waters said. "It’s why I wrote legislation to provide $46.6 billion in emergency rental assistance, which successfully prevented over six million families from being evicted. And it is why I continue to fight every day to secure significant new investments in affordable housing, including the $150 billion that was included in the Build Back Better Act." The housing market has been on fire, but how does this affect renters? Inflation and wage data suggest US prices will keep climbing