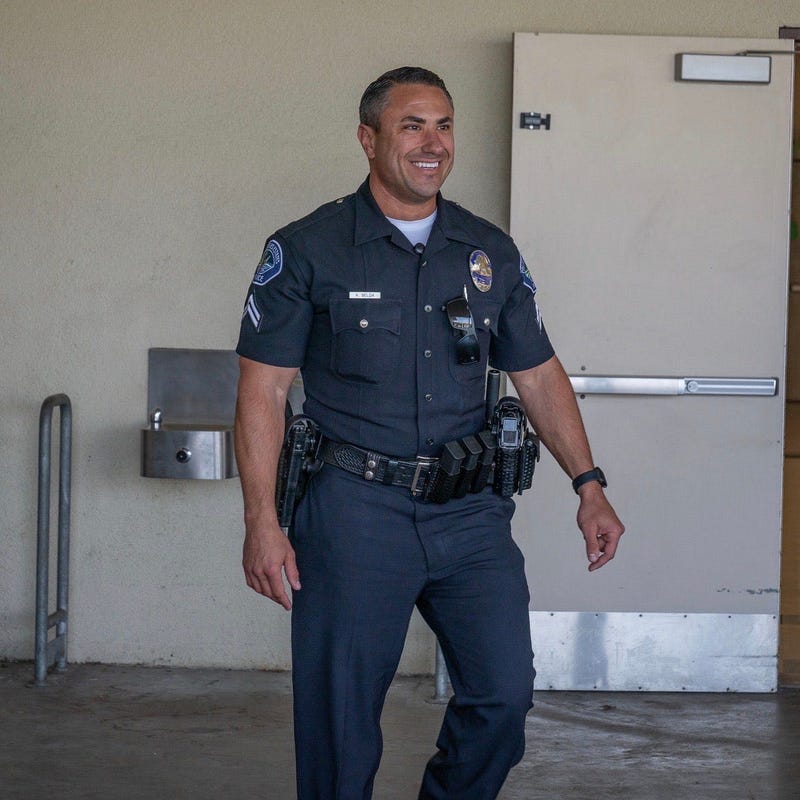 Every day, members of our local law enforcement put themselves in the face of danger. Our KNX Hero of the Week did just that, to help save family members from a burning home.

"When we got there, the homeowner was standing outside of his open garage door, and he had a water hose. He looked like he was trying to extinguish whatever was causing this black smoke to come out of his garage," says Corporal Belda.

A fire escalated within seconds.

"The entire front of the house and the garage was engulfed in flames," explains Belda,"extending well above the top of the roof."

Firefighters were on their way. As the flames were building, Belda says the man suddenly ran back inside the home.

The homeowner grabbed a couple pets, and both men then ran outside. But the homeowner thought that his wife was still inside, so he turned back. But Belda stopped him.

Instead, Belda went to search for her, despite not having any protective gear. "I went back into the house, and started searching room to room."

"Man, I gotta tell you. That smoke was filling up the interior of the house so bad, to where I couldn't keep my eyes open. I was kind of just feeling around, for where I was going," explains Belda.

"I have a new found level of respect for what the men and women in the fire department go through on a daily basis, dealing with this smoke. I was completely incapacitated."

By this time, officers had located the woman out on the street. So, Belda fought his way out of the house, crawling through the back door of the home, covered in smoke and soot.

And, he was choking. "Uncontrollable coughing. I started throwing up, I started vomiting."

Belda was treated at a local hospital, and was later released.

Palos Verdes Estates Police Sergeant Steve Barber has worked with Corporal Belda for years. He says Belda is not afraid of danger, when it comes to saving a life.

"Aaron really understands our motto, which is 'commitment to community.' And, he's just a great guy!" boasts Sgt. Barber.

Palos Verdes Estates Corporal Aaron Belda is our KNX Hero of the Week!

If you have someone you'd like to nominate as a KNX hero, fill out the form at https://knxnews.radio.com/nominate

LISTEN TO AUDIO BELOW