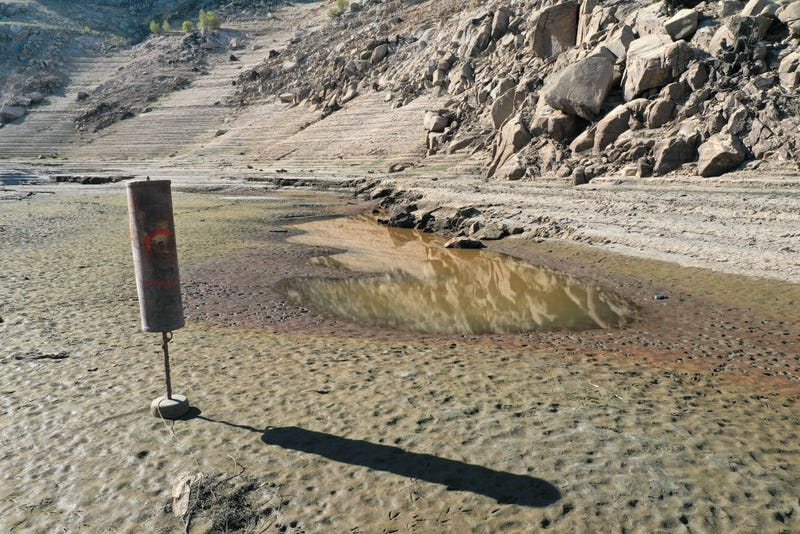 In an aerial view, a buoy sits on dry ground that was previously underwater at Lake Oroville on July 22, 2021 in Oroville, California. As the extreme drought emergency continues in California, Lake Oroville's water levels are continuing to drop to 28 percent of capacity. Photo credit Justin Sullivan/Getty Images
By KNX 1070 Newsradio

LOS ANGELES (KNX 1070) -- The drought seems to be going from bad to worse to bone-dry. A new poll showed voters are worried. Respondents also said they are open to new restrictions on water use.

The state is experiencing a severe drought for the second time in a decade. Reservoirs are running low and officials and residents expressed concerns over the water supply.

Mark Baldassare is the president and CEO of the Public Policy Institute of California. He said the latest surveys indicate that residents are ready to do what they need to do to conserve water.

“They are comfortable with going back to water restrictions. In fact, about four in ten say they have already done a lot to reduce their water use,” said Baldassare.

But about 20 percent said they have not made any changes.  Los Angeles residents told KNX they are certainly ready to take action.

A new poll shows California voters may be open to water restrictions in light of the latest severe #drought. It also shows they don’t think people are doing enough to conserve water. And that local governments aren’t doing enough to deal with the drought either. @KNX1070 pic.twitter.com/DGcEiPinaX

The governor so far has only called for a 15 percent voluntary reduction in water use.

Critics, like Peter Gleick of the Pacific Institute, argue the voluntary call "does not go far enough."

According to UC Irvine urban planning expert David Feldman, recycled waste water needs to be higher on the state’s agenda.

“I totally get why people would say, initially, yuck,” he said.

But, Feldman has had a glass of treated wastewater and said it is good. Also, the professor said water agencies need to collaborate and invest in other methods of storing water.

“Let’s begin to take measures in terms of land juice and rainwater capture so that we are able to literally save that water for a non-rainy day,” said Feldman.

Experts have said the state’s drought is becoming dire. Some believe the governor may be forced into making mandatory water restrictions like those introduced by former Gov. Jerry Brown six years ago during the last major drought.