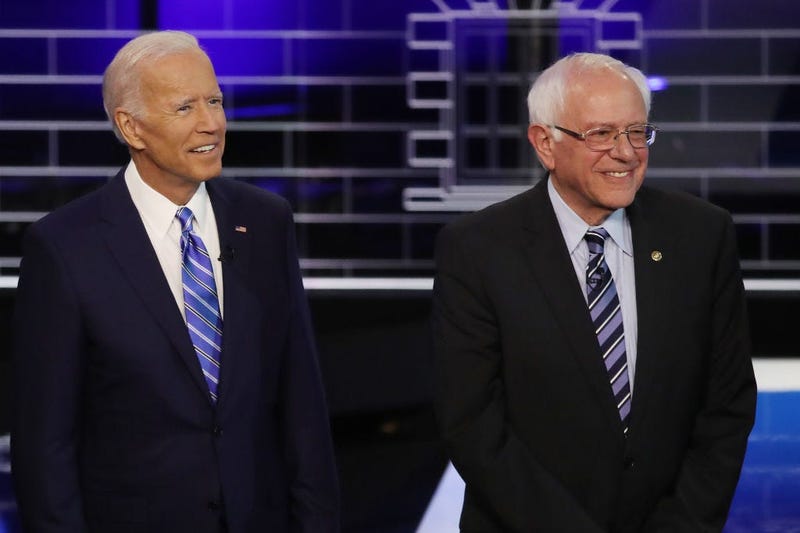 Super Tuesday seemed to turn into a two-man battle between former Vice President Joe Biden and Vermont Sen. Bernie Sanders early in the night, despite five candidates vying for delegates from 14 states and one U.S. territory.

RELATED: What You Need To Know On Super Tuesday

Early in the night, Biden scored a series of wins taking Alabama, Oklahoma and the battleground states of North Carolina and Virginia. CBS News then projected the former Vice President to win the Tennessee primary and the Associated Press projected him to win Minnesota and Arkansas. He also took Massachusetts, upsetting Sen. Elizabeth Warren in her home state.

Joe Biden: "We were told when we got to Super Tuesday, it'll be over. Well, it may be over for the other guy." https://t.co/dejxP1swQq pic.twitter.com/sJDokFeQmK

Meanwhile, Sanders claimed the biggest Super Tuesday prize with the Associated Press projecting he would take California, which has 415 delegates up for grabs. Sanders also pulled off an expected home-state win in Vermont and took another victory in Colorado, which has 67 delegates at stake, as well as Utah.

Bernie Sanders tells supporters in Vermont: "Tonight, I tell you with absolute confidence, we are going to win the Democratic nomination and we are going to defeat the most dangerous president in the history of this country" https://t.co/dejxP1swQq pic.twitter.com/5J8h5dXuFa

Maine and Texas were too close to call after midnight, with Biden holding a slim lead in Maine (about 2,000 votes) and a growing lead in Texas (about 25,000 votes).

Votes were still being called early Wednesday, but the Associated Press allocated 362 delegates to Biden, 285 to Sanders, 30 to Bloomberg, 20 to Warren and one for Rep. Tulsi Gabbard.

Bloomberg, the former mayor of New York City, appeared on the ballots for the first time on Super Tuesday, but saw a poor performance overall.

While he took at least five delegates from American Samoa, according to the Associated Press, the former New York City mayor will reassess whether he will continue his bid for president on Wednesday.

Hawaii Sen. Tulsi Gabbard remains in the race but has not reached double-digits – nor has any other candidate that has since dropped out.

California poll numbers suggest Sanders also has the most support among potential voters with 35%. He is followed by Warren at 14%, Biden at 13% and Bloomberg at 12% support.
Despite struggling in the polls, Warren vowed to remain in the race. Early results showed her polling in third in her home state, and that could be a bad look for her campaign.

"Symbolically it's bad. It hurts her narrative. The question then is if you can't win in your home state where can you win?" CBS News reporter Zak Hudak told WCBS 880. "It's embarrassing for her if that happens. Does it threaten her Senate seat in the future? I don't know, maybe? At the very least it's really embarrassing and it kind of creates this mentality of her own people, her own constituents, don't want her to be president."