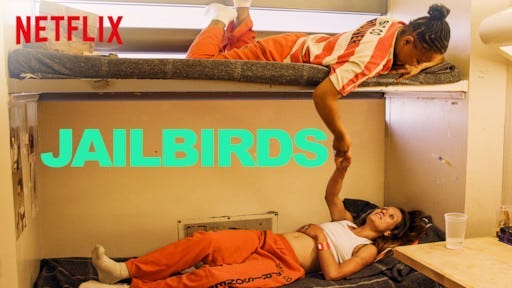 This week Jensen brought our attention to a brand new Netflix Original Series called Jailbirds. Jailbirds is the reality show version of what life is really like on the inside of a women’s prison. It’s almost like Orange is the New Black, but a documentary. It follows the all-female 7th floor at the very tough Sacramento County Jail and it gives viewers a raw look at life on the inside.

Jensen jokingly refers to it as Vanderpump ‘Prison’ Rules, because it shows a human, and relationship focused, side of a difficult situation. It follows the inter-workings, friendships, couples and politics that take place behind bars. Make no mistake about it, the show features a cast of actual murders, burglars, and several other convicted felons. These are not petty criminals. But, they’re still people with thoughts, feelings, and emotions and you’re able to see them work through it.
Aside from following individual stories, we also get a look at the way the inmates on different floors communicate. The female inmates on the 7th floor are able to talk to the male inmates on the 8th floor through a process called Toilet Talk. They knock on the bowl to signal communication, and because the 7th and 8th floors are so close to each other, they’re able to communicate by talking directly into the toilet. It’s also how these inmates date. You even get to watch a love triangle between 2 female inmates and a male inmate on the 8th floor.
The prisoners also, use the toilets to pass contraband to each other with a process called Fishing. They use undershirts and attach spoons to them, flush them simultaneously and when the spoons intertwine, you can either pull contraband up or down the pipes. The inmates have become so resourceful that it makes you think, if they weren’t in jail - they might be doing great things in life.

There are six episodes in season 1 and there’s already talk of a second season. Jailbirds was released about 2 weeks ago and though you may find yourself questioning the ethical and moral intentions of a jail system ready to televise prisoners during rehabilitation, there’s a lot to learn, and binge, in Jailbirds.