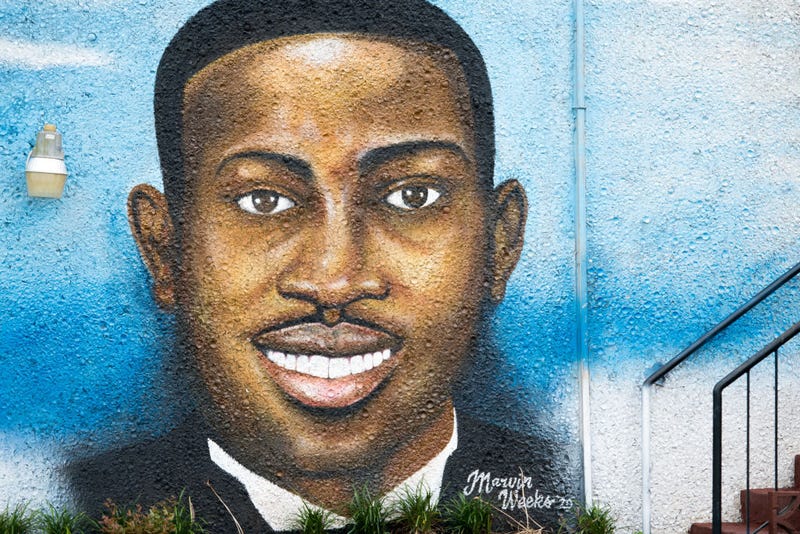 Feb. 23 marks the one-year anniversary of the death of Ahmaud Arbery, a 25-year-old Black man who was chased and fatally shot while jogging in Glynn County, Georgia.

On Monday, Arbery’s mother, Wanda Cooper-Jones, joined V103’s The Morning Culture with Big Tigger to remember her son and discuss the candlelight vigil being held on Tuesday to commemorate the anniversary of his tragic death.

The vigil will take place at New Springfield Baptist Church in Waynesboro, GA on Tuesday, Feb. 23.

Cooper-Jones said the year since her son’s death has been a “whirlwind,” and opened up about one of the most challenging parts or her son’s death — seeing the phone-captured footage of when he was shot and fell to the ground, and imagining his final moments.

“I haven’t really looked at the video in entirety,” Cooper-Jones explained.

But “the little snippet I saw,” she continued, “I think the most hard is, after Ahmaud was shot, when he began to run away, I saw it when he was  falling into the ground. So I think that was the most disturbing part. Just knowing that that’s how he left this world. He left it in pain, in confusion, and again, he left the world alone. He didn’t have anybody by his side.”

When asked about her son’s portrayal in media coverage of his death, Cooper-Jones emphasized the love that his family had for Arbery.

“Ahmud was a person that was loved,” his mother explained. “Ahmaud was a son, he was a brother, he was an uncle. And yes, he was a grandson. Ahmaud was loved by many.”

And she said that same love emanated from her son to all those around him.

“If you knew Ahmaud, you know Ahmaud was a young man of love,” Cooper-Jones said. “If he ever left your presence, it was always ‘I love you.’”

Arbery’s mother also commented on how racial dynamics differ in Glynn County from the more widely known Atlanta, and said that a legacy still persists today of the area’s Jekyll Island, the 19th-century destination of Georgia’s last slave ship.