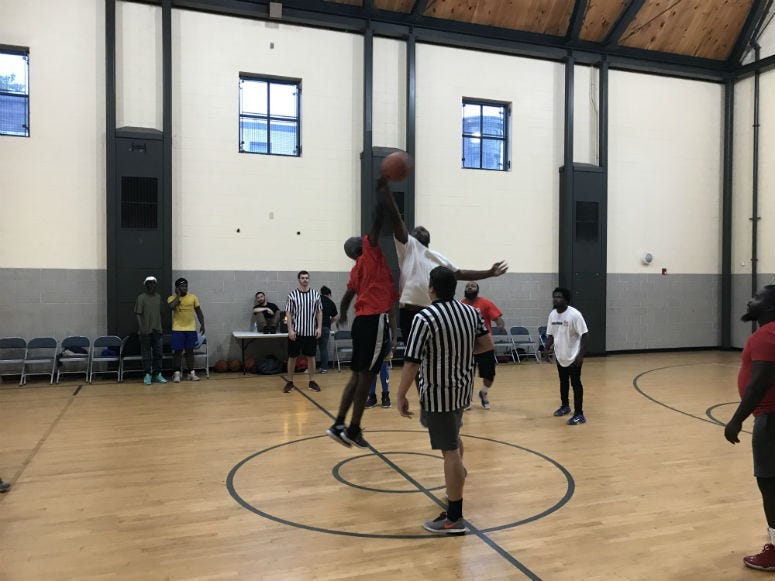 PHILADELPHIA (KYW Newsradio) — A unique basketball league is reaching out to homeless residents in Philadelphia to help them make life changing plays off the court, making a lot of progress in just a few months.

"I just wanted to get to do a little exercise, lose some weight, and just have fun. That's all I wanted to do, is have a little fun," said Leonard Taylor, who joined Hoops for Hope a few months ago when he was homeless and living at a shelter.

The basketball league is made up of about 50 men from six different shelters around the city.

Taylor says since joining the league, he's been able to turn his life around with the help of those running the group.

"They showed me how to balance my money, showed me what to do with everything. I take my meds, I go take care of business. I don't mess around, I just do what I got to do," he said.

Those off the court plays helped Taylor make a big score.

"I'm happy because I got my own place. I got it on my birthday. My 62nd birthday."

Even though he now has a place to call his own, Taylor still plays in the league at the Church of the Advocate in North Philadelphia and talks with the guys looking to change their lives for the better.

"It feels good to be one of the guys, have fun, enjoy yourself," he said.

He also says the game has helped put him in a better mental and physical place.

Dasse Yobo, who is experiencing homelessness, says the league is giving him a chance to grow as a person.

"It kind of helps you outside of basketball as well, as far as socializing with your peers," Yobo said.

Hoops for Hope's Dia Swan says one of their goals is to help the men with their mental health through physical activity.

"We want to create a safe environment for them to come out and play. Exercise obviously helps with depression and anxiety, which a lot of these guys deal with, so we want an out let for them to relieve some stress," Swan said.

She says they are also working with the guys to get them out of their current living situations.

"Our end goal is really try to partner up with companies and get these guys jobs and hopefully different resources, to get them out of the shelter, and get them back on their feet and in the right direction," she added.

The league meets up every Wednesday evening at 6 p.m. to 9 p.m.

The program is supported by the City's Department of Behavioral Health and Intellectual disAbility Services (DBHIDS) and the Resources for Human Development.