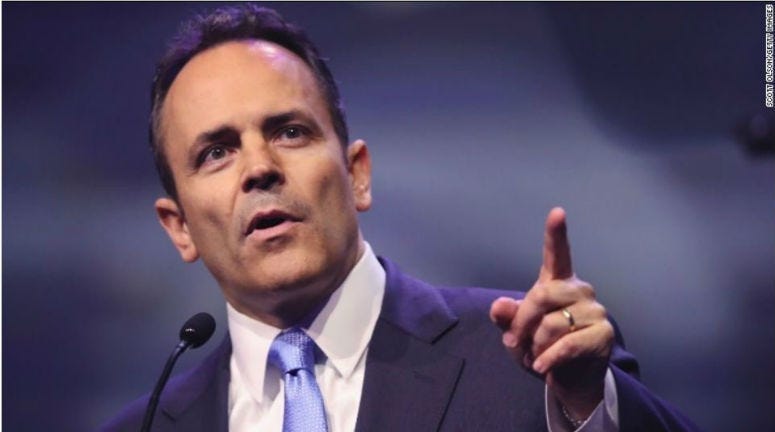 By Nicole Chavez and Janet DiGiacomo, CNN
(CNN) -- Kentucky Gov. Matt Bevin said he made sure all his nine children were exposed to chickenpox and caught the disease instead of giving them a vaccine.

"They had it as children. They were miserable for a few days, and they all turned out fine," Bevin said in an interview with WKCT, a Bowling Green radio station.

Bevin and his wife, Glenna, have nine children between the ages of 5 and 16, according to his campaign website.

The governor says he supports parents who choose to get their children vaccinated and also those who decline to do so. But he said the decision shouldn't be up to the government.

"This is America," he said. "The federal government should not be forcing this upon people. They just shouldn't."

Chickenpox is a very contagious disease that causes a blister-like rash, itching, tiredness and fever, according to the US Centers for Disease Control and Prevention. It can spread by touching or breathing in virus particles. It can be especially serious for babies, pregnant women and people with weakened immune systems.

Bevin's remarks come several days after a teen in Kentucky sued his local health department, which had temporarily barred students who aren't immunized against chickenpox from attending school after an outbreak at a Catholic school.

There have been 32 cases of chickenpox reported.

The teen and his father allege that he's being discriminated against because of religious beliefs. Some Catholics worry about vaccines derived from cell lines associated with abortion.

The Northern Kentucky Health Department argued the ban "was an appropriate and necessary response to prevent further spread of this contagious illness."

Chickenpox has not gone away since the vaccine was introduced in the United States in 1995, but each year, more than 3.5 million cases are prevented by the chickenpox vaccination, the CDC said.

Initially, only one dose of the vaccine was recommended for children. But when experts realized that a small percentage of children didn't mount robust immunity after the first dose, the recommendations were changed. Two doses are currently recommended: one at 1 year of age and a second around 4. The two-dose vaccination program has resulted in a smaller number of outbreaks, according to the CDC.