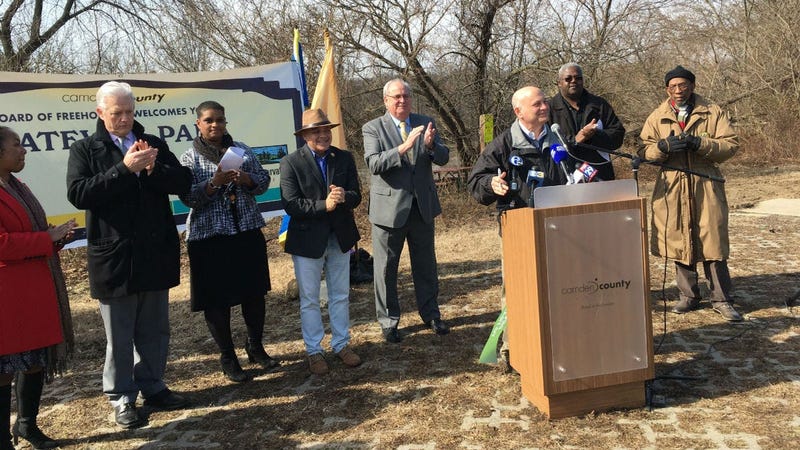 A lot of residents agree with Camden County Freeholder Jeff Nash — that it's hard to believe that, after 19 years, the stretch along Admiral Wilson Boulevard, once populated by gas stations, prostitutes and seedy motels, has finally reopened as Gateway Park.

The establishments were razed in preparation for the 2000 Republican National Convention. And the half-mile strip remained dormant, while county agencies transferred ownership and underground petroleum tanks were cleared.

Nash empathized with residents who waited for the promise of a park to be fulfilled.

"I know it took a long time to do," he said. "Sometimes environmental remediation takes a long time, because when you are going to provide a park to the public, you have to ensure that the property is clean and pristine."

"Man, oh-Manischewitz!" he said. "Look at this place. This is awesome. You've got the creek back here, the river back here."

Camden resident Martha Chavis, of the group Friends of Cooper River Park West, says her patience has paid off.

"I was frustrated, like many folks in Camden, that it was taking so long. But as Freeholder Nash explained, the remediation of the park was very time-consuming," she said. "And we thought it would happen sooner than it has happened now, but it has happened now, and we are very happy and very proud."

She said she is eager to finally take advantage of the new space.

"The first thing I'm going to do is take a nice good walk in the park. I am a park walker. I'm originally from Philadelphia -- Lower Germantown, East Falls. And back in the day, when I was a kid, you walked up and down East and West River Drive."

The New Jersey Conservation Foundation will join with the County Municipal Utilities Authority in managing the new park, which includes a trail and bike path along the Cooper River. And there are plans for boat ramps and a floating boardwalk connecting Gateway Park with Farnham Park across the river.