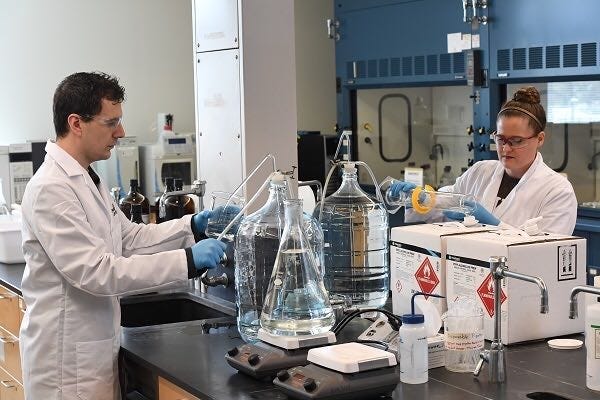 PHILADELPHIA (KYW Newsradio) — A Rowan University chemistry professor and his wife killed two birds with one stone this week, by doing something good and temporarily curing boredom.

Jim Grinias is an assistant professor of chemistry at Rowan and his wife Kaitlin is a chemist at a pharmaceutical company, and they were both catching cabin fever.

"You know, after being stuck in the house for a couple of weeks, we both had the itch to get back in the lab a little bit," Grinias admitted.

So they dropped off their son at grandma’s house for a couple of days and got to work making hand sanitizer, using the Centers for Disease Control and Prevention’s recipe and raw materials that were donated by the school.

"It was 200 proof ethanol, so effectively 100%, as pure as you can really buy. And then we had some hydrogen peroxide and then glycerol, which is a thick goopy liquid that is a thickening agent," Grinias explained.

They boiled water and mixed the solution into five gallon buckets. It produced an 80% alcohol-based sanitizer that will stock the reserves at the Cooper Medical School in Camden.

"One small, little thing that we could do to contribute to the effort," Grinias said.

And a pretty cool way to kill some time, too.