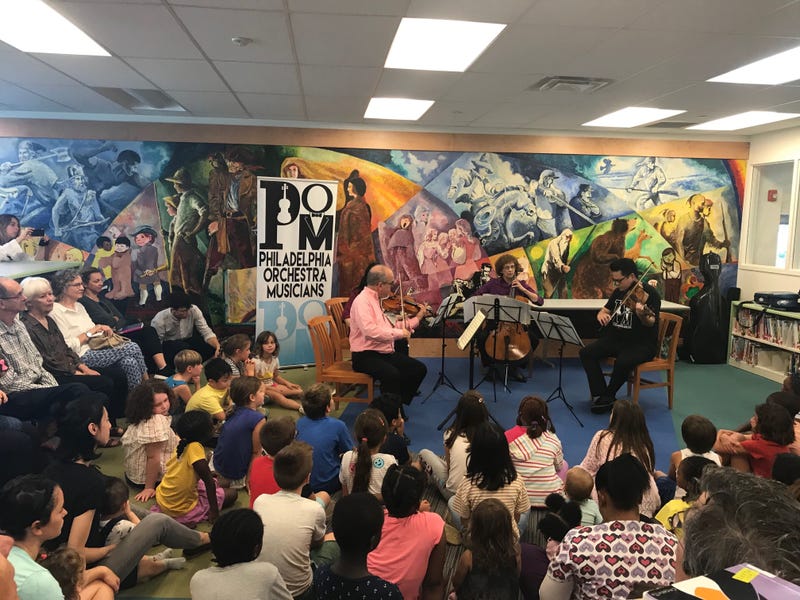 PHILADELPHIA (KYW Newsradio) — For one day, the Philadelphia Orchestra is getting out of the concert hall, and bringing music to the people, as they embark on a daylong series of special, small shows at unlikely places throughout the region.

Margie Harris brought her 18-month-old granddaughter Miriam to the Bala Cynwyd Library on Monday to hear the orchestra's string quartet.

"This is her first live concert. I didn't want to miss this opportunity. It's so special," Harris said.

. @philorch is taking their music from the concert hall to the people. It’s part of their audience appreciation concerts @KYWNewsradio pic.twitter.com/V8XUtI3Imq

She says she could not ask for a better setting to see and hear some of her favorite musicians.

"It's so beautiful. To see the community, all ages, listening to these fabulous professional musicians. It's incredible."

Philadelphia Orchestra violinist Paul Arnold says he loves their audience appreciation concerts, where they go to different neighborhoods and play for a variety of people.

"Honestly, it's better, because all the stigma of the concert hall setting is dispensed with, and it's really one to one. We open the floor to questions," Arnold said.

He says these shows help them reach an audience who otherwise may not have listened to them.

CORRECTION: In a previous version of this story, Miriam's name was misspelled.