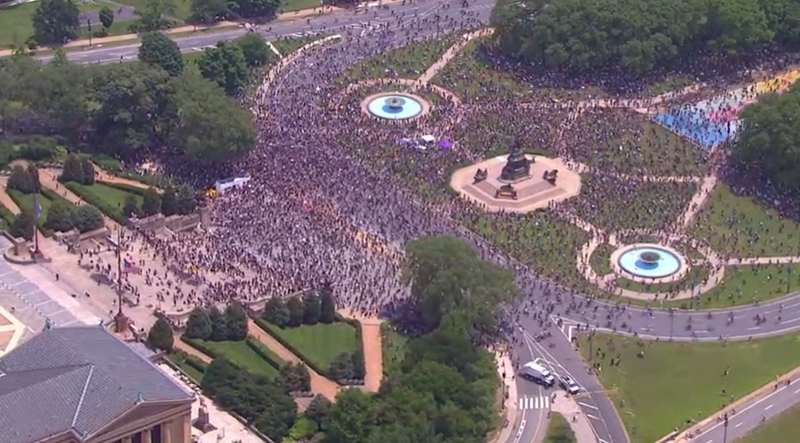 Woman Drags Basketball Hoop Around Town to ‘Break that Tension’ Between Police, Protesters

PHILADELPHIA (KYW Newsradio) — Thousand of people gathered at the Philadelphia Museum of Art and then marched across the city, taking over the streets to make a point about racial injustice in America.

As the crowd assembled in front of the Art Museum, city officials announced another curfew for the eighth night in a row, effective at 8 p.m. and ending Sunday at 6 a.m.

While medics expected a peaceful event, they said they were prepared to equip themselves with goggles and helmets, and urged caregivers to take them only if they were ready to walk into tear gas.

"There is a pandemic going on, but it's several pandemics," she explained. "Our mental health system, our public health system, our criminal justice system, our legislative system, our social structure, our arts and entertainment system. Everything that we do is dictated around a racist set of rules, and until we get rid of those rules, we can't fix anything else about this country."

And now that they have the world's attention, protester Tamari Wilson says they want to raise awareness about systemic racism, so they can end it.

While the turnout out here was enormous, Lazuli said the real turnout that matters will happen in November.

"Every voice matters," she said. "It's like the Lorax said, 'Unless someone like you cares a whole awful lot, nothing's gonna change, it's not.'"