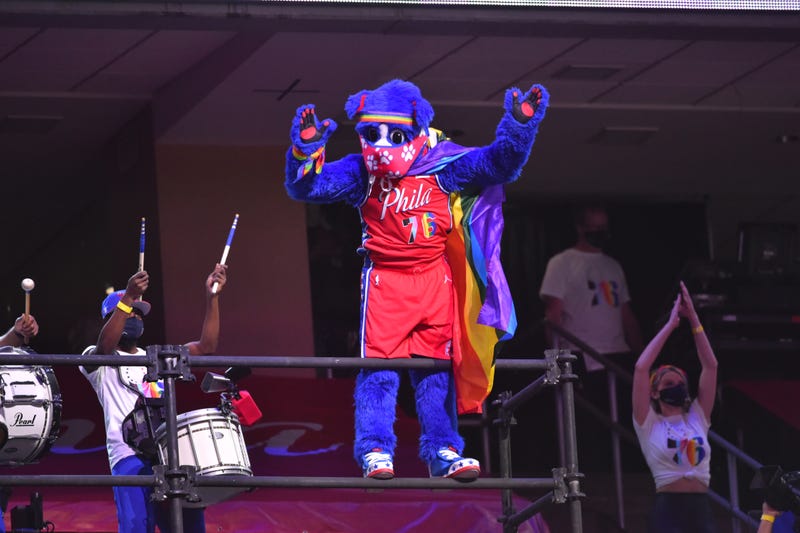 This year’s celebration came one day after the anniversary of the historic sit-in at Dewey’s Restaurant in Center City, on April 25, 1965.

Before the game, Sixers head coach Doc Rivers explained the importance of the night.

“No. 1: education,” he said. “Open-mindedness … inclusion. We just need to learn just to understand each other and be more tolerant to each other, and so I think it’s important to have all these nights. Pride Night is one of them.”

Details on the #Sixers annual Pride Night this evening, which comes one day after the 56-year anniversary of the historic sit-in at Dewey’s Restaurant in Center City on April 25, 1965. pic.twitter.com/BL2K8mgG20

American figure skater and two-time Olympian Johnny Weir — also a native of Coatesville, Pennsylvania — was the ceremonial bell-ringer prior to opening tipoff.

The evening also brought awareness to the Sixers’ partnership with the William Way LGBT Community Center and featured an interview with WNBA champion and  Delaware County native Natasha Cloud, which was posted by the team on social media.

We recognize those who continue the fight for equality, like Philadelphia Native and WNBA player @T_Cloud4, who has tirelessly been on the frontlines of change, using her platform and voice. pic.twitter.com/EqEoUks4YZ