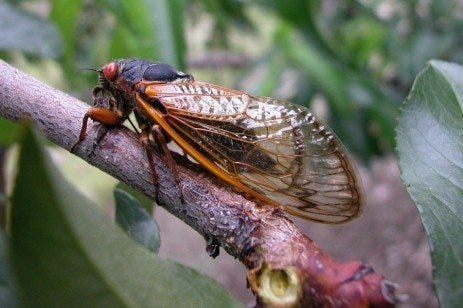 PHILADELPHIA (KYW Newsradio) — An insect that shows up every 17 years will reappear in southeastern Pennsylvania in the next several weeks as the weather begins to warm up.

The periodical cicadas, ugly-looking bugs with big eyes, large wings and up to 1 1/2 inches long, are about to invade the region.

The males make a chirping sound to attract females to populate the next brood.

“I think it was European settlers first came to this country,” Seifrit said. “They had never really seen them, so they thought it was a biblical plague. Don’t do that. Don’t think that this is a plague.

Seifrit said there are some tell-tale signs the cicadas have arrived.

“They’re slowly going to start coming out of these little like 1-inch-wide holes in the ground,” he said. “They’ll kind of stay on the bottom parts of the trees. Once they crawl out of the ground ... you’ll see all their exoskeletons that they’ll leave, left over.

“But yeah, thousands of these guys are likely to emerge here.”

Seifrit said the danger the bugs pose is to young trees caused by the thousands of females who penetrate the tender branches and lay their eggs inside.

“Even just one female laying an egg in a branch,” Seifrit explained. “If you do that thousands and thousands of times, that’s where you really see a bunch of damage add up over time.”

He said the nymphs fall to the ground and bore into the soil where they hibernate for 17 years before emerging, crack their exoskeleton and are full-grown adults ready to begin the cycle again.

Seifrit said they’re generally gone by June, but some stragglers can hang out into the summer.

He said cicadas may show up in your yard, parks or wooded areas. However, no worries about the bugs living too long. He said their natural predators are birds.

“Keep your bird feeders well-stocked during this time to kind of encourage those birds to show up,” Seifrit said. ​