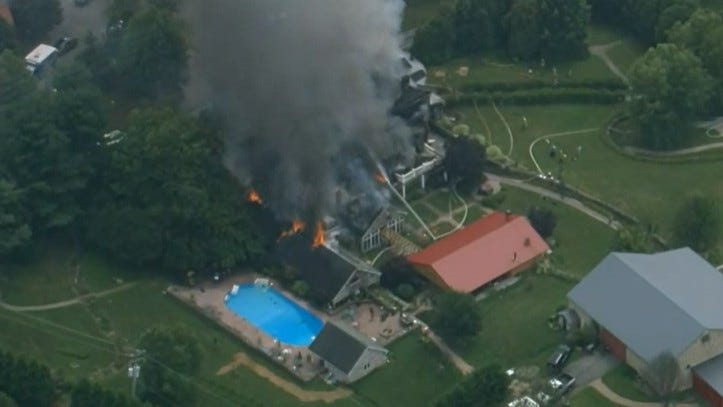 At least three people have been hurt, including two children, in an explosion and house fire in West Brandywine Township, Chester County. Photo credit SkyForce 10
By Antionette Lee, KYW Newsradio

COATESVILLE, Pa. (KYW Newsradio) — Six people were injured in an explosion and fire at a two-story farm home in Chester County.

The family of six people, including four children, were in the West Brandywine Township home at the time, located on Hibernia Road near Reid Road.

At least four people were trapped in the home. Three of them were able to get out, and one was on the roof as rescue crews arrived.

One person was flown by chopper, and at least two children were taken to Nemours/Alfred I. duPont Hospital for Children in Wilmington. One person refused treatment.

Officials received a call about the explosion just before noon. Some police say they actually felt the explosion because they were at a county building next door from the house.

There were secondary explosions, so emergency crews had to step back before some rescue attempts.

The fire has been extinguished after several hours of work by firefighters.

The cause of the fire is unknown. Chief Kimes said that local, state and federal officials are investigating.

Stay with KYW Newsradio for more on this developing story.