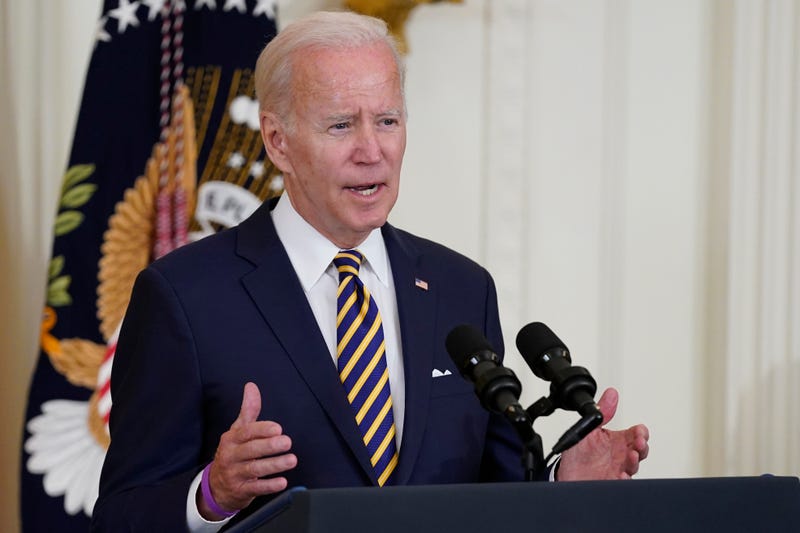 WASHINGTON (KYW Newsradio, AP) — President Joe Biden on Wednesday announced detailed plans to deliver on a campaign promise to provide $10,000 in student debt cancellation for millions of Americans — and up to $10,000 more for those with the greatest financial need — along with measures to lower the burden of repayment for their remaining federal student debt.

However, for some, that amount barely scratches the surface of what they need.

Borrowers who earn less than $125,000 a year, or families earning less than $250,000, would be eligible for the $10,000 loan forgiveness, Biden announced. For those who also receive Pell Grants, which are reserved for undergraduates with the most significant financial need, the federal government would cancel up to an additional $10,000 in federal loan debt.

"Both of these targeted actions are for families who need it the most: working and middle class people hit especially hard during the pandemic," Biden said in remarks at the White House Wednesday afternoon.

Biden is also extending a pause on all federal student loan payments for what he called the “final time” through the end of 2022.

“It’s a big relief, yeah,” said La Salle University graduate Paul Fitzpatrick, from Camden County. “But it feels like it’s only a bit of a dent, like a small one. But I'm not going to complain, I'm happy to take that. And I hope that it's a process for more."

Fitzpatrick is still paying off $120,000 on his undergraduate and masters degree programs.

"It's kind of like having a sword hanging over your head all the time. There's a lot of times I can't get things that I need,” he admitted.

"It's hard for a lot of people with that much debt, who went into that debt in good conscience, looking to better themselves [and] aren't able to get out of that."

If Biden’s plan survives legal challenges that are almost certain to come, it could offer a windfall to many in the run-up to this fall's midterm elections. More than 43 million people have federal student debt, with an average balance of $37,667, according to federal data. Nearly a third of borrowers owe less than $10,000, and about half owe less than $20,000. The White House estimates that Biden's announcement would erase the federal student debt of about 20 million people. 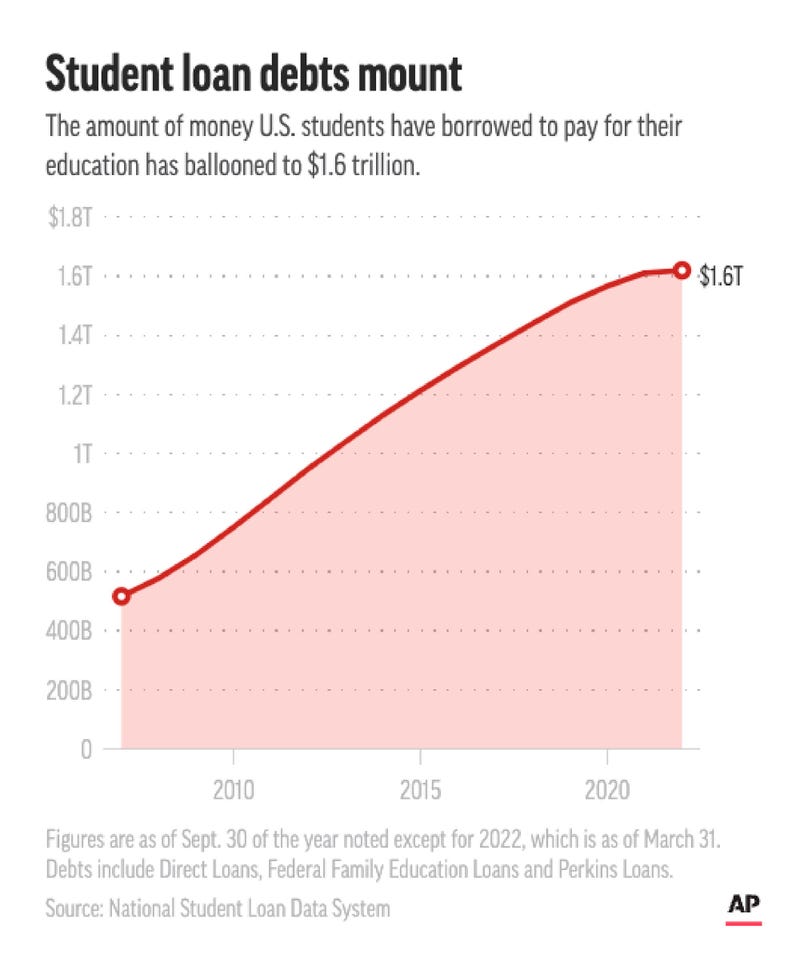 U.S. students have racked up $1.6 trillion in student loans as of the end of March. Photo credit AP Graphic

“That’s 20 million people who can start getting on with their lives," Biden said. "All this means, people can start to finally crawl out from under that mountain of debt. To get on top of their rent and utilities. To finally think about buying a home or starting a family or starting a business.”

Proponents say cancellation will narrow the racial wealth gap — Black students are more likely to borrow federal student loans and at higher amounts than others. Four years after earning bachelor's degrees, Black borrowers owe an average of nearly $25,000 more than their white peers, according to a Brookings Institution study.

Biden has faced pressure from liberals to provide broader relief to hard-hit borrowers, but also from Republicans questioning the fairness of any widespread forgiveness.

The White House emphasized that no one in the top 5% of incomes would see any loan relief.

But top Republicans were not persuaded.

Senate GOP leader Mitch McConnell said, "President Biden’s inflation is crushing working families, and his answer is to give away even more government money to elites with higher salaries. Democrats are literally using working Americans’ money to try to buy themselves some enthusiasm from their political base.”

In fact many Democrats, from congressional leaders to others facing tough reelection bids this November, have pushed the administration to go as broadly as possible on debt relief, seeing it in part as a galvanizing issue, particularly for Black and young voters.

The extension of the pandemic-era payment freeze comes just days before millions of Americans are to find out when their next student loan bills will be due. The current pause is to end Aug. 31.

The administration said the Education Department would release information in coming weeks for eligible borrowers to sign up for debt relief. Cancellation for some will be automatic, if the department has access to to their income information, but others will need to fill out a form.

Current students would be eligible for relief only if their loans were originated before July 1, 2022. Biden is also proposing capping the amount that borrowers must pay monthly on undergraduate loans at 5% of their earnings, down from 10% previously. The Education Department is to post a proposed rule to that effect, which would also cover the unpaid monthly interest for borrowers who remain current with their monthly payments — even when the payments are $0 because their incomes are low. 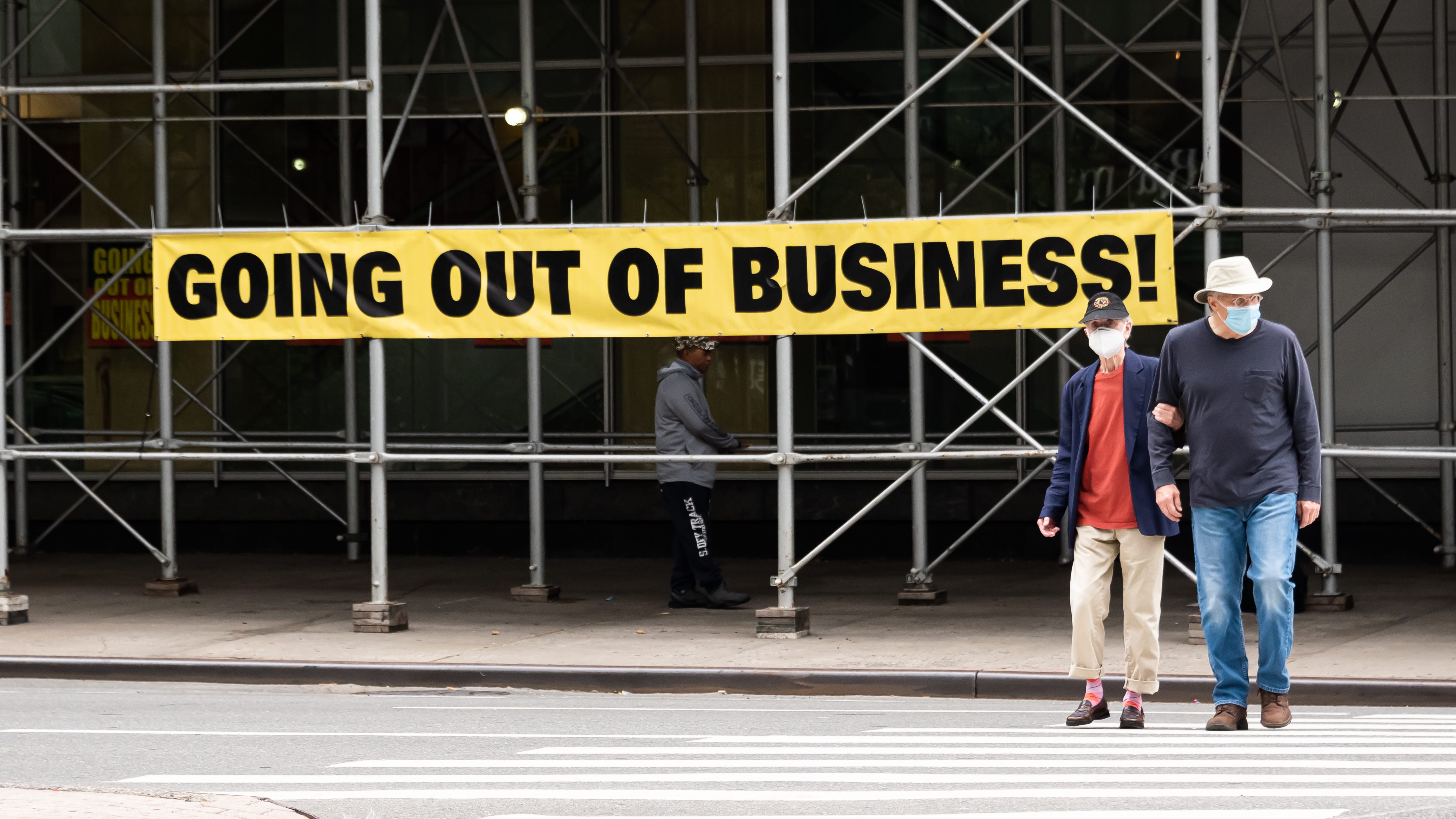 Nearly 7 in 10 Americans fear a recession is imminent, poll finds

The Biden administration plan would also raise the income floor for repayments, meaning no one earning below 225% of the federal poverty level would need to make monthly payments.

Biden’s plan builds on $32 billion in targeted student debt forgiveness his administration has enacted for certain groups of borrowers. Much of that went to borrowers who say they were defrauded by for-profit colleges.

The administration also temporarily has relaxed the rules for Public Service Loan Forgiveness, a complex program that allows teachers, social workers and other public servants to get student debt canceled after 10 years of monthly payments.

“The positive impacts of this move will be felt by families across the country, particularly in minority communities, and is the single most effective action that the President can take on his own to help working families and the economy," said Sen. Elizabeth Warren on Wednesday in a joint statement with Senate Majority Leader Chuck Schumer.

Tweeted Rep. Pramila Jayapal, the chair of the House Progressive Caucus: “This will bring real relief to 43 million people and is a MASSIVE step in the right direction."

The Justice Department released a legal opinion concluding that the Higher Education Relief Opportunities for Students Act gives the Education secretary the “authority to reduce or eliminate the obligation to repay the principal balance of federal student loan debt.” The legal opinion also concluded that the debit could be applied on a “class-wide” basis in response to the coronavirus pandemic.

During the 2020 presidential campaign, Biden was initially skeptical of student loan debt cancellation as he faced off against more progressive candidates for the Democratic nomination. Sens. Warren, D-Mass., and Bernie Sanders, I-Vt., had proposed cancellations of $50,000 or more.

As he tried to shore up support among younger voters and prepare for a general election battle against President Donald Trump, Biden unveiled his initial proposal for debt cancellation of $10,000 per borrower, with no mention of an income cap.

Biden narrowed his campaign promise in recent months by embracing the income limit as soaring inflation took a political toll and as he aimed to head off political attacks that the cancellation would benefit those with higher take-home pay. 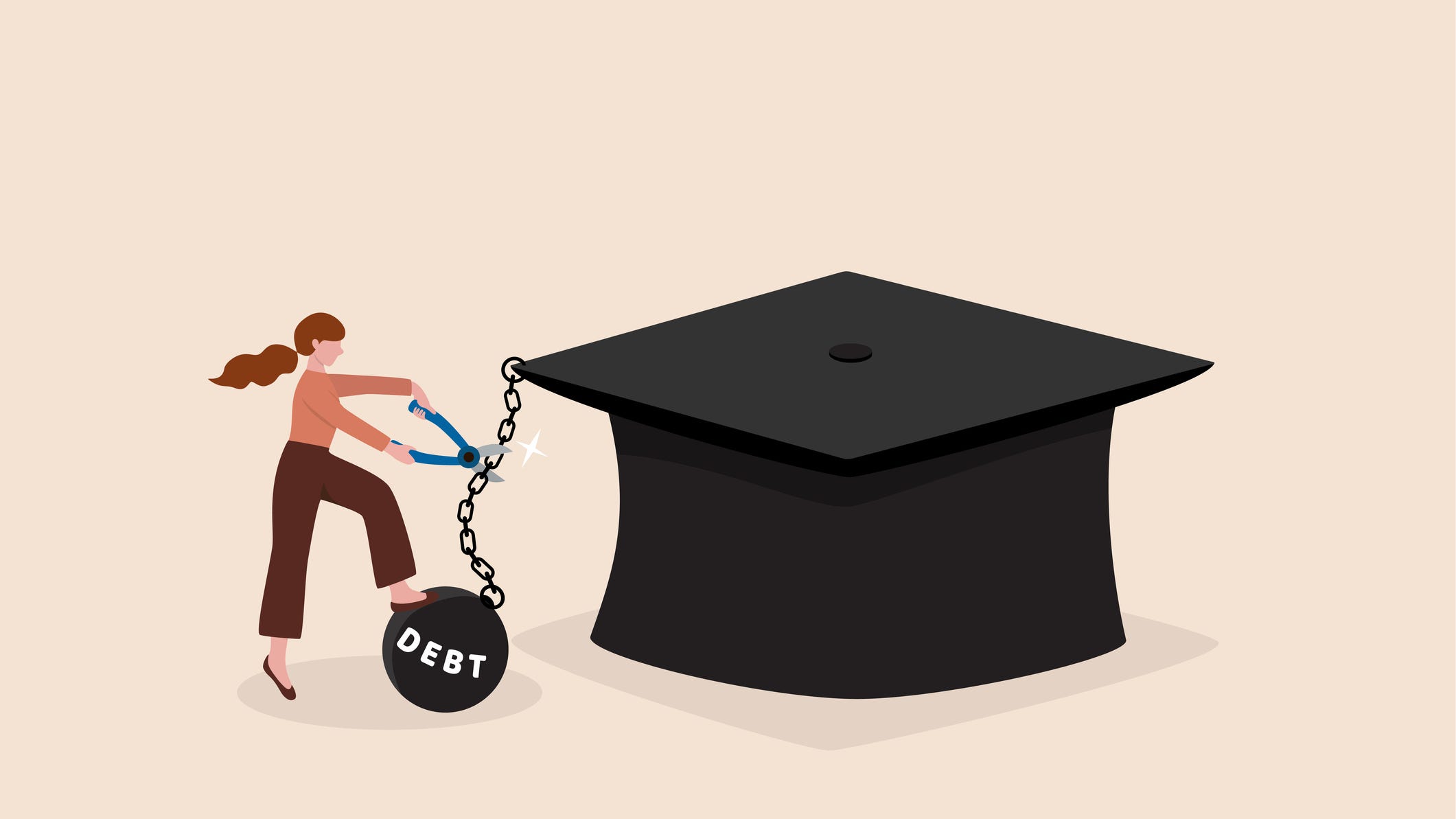 Changes coming to student loans could get millions out of debt

A survey of 18- to 29-year-olds conducted by the Harvard Institute of Politics in March found that 59% of those polled favored debt cancellation of some sort — whether for all borrowers or those most in need — although student loans did not rank high among issues that most concerned people in that age group.

Republicans responded swiftly to Biden’s decision on student debt relief Wednesday, calling out the administration for “selling out working families” to appease to the progressive wing of the party.

“Today’s announcement is an insult to every American who played by the rules and worked hard to responsibly pay off their own debt,” Sen. John Barrasso, chair of the Senate Republican Conference, said in a statement. 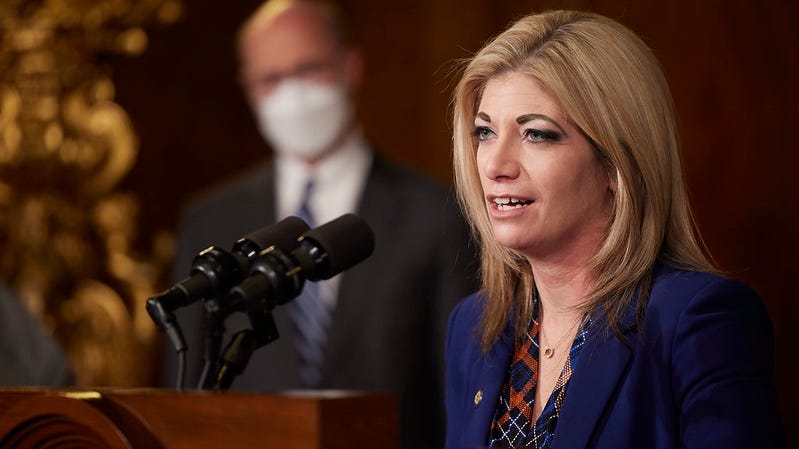 Biden’s long deliberations have led to grumbling among federal loan servicers, who had been instructed to hold back billing statements while Biden weighed a decision.

It increases the risk that some borrowers will inadvertently be told they need to make payments, he said.

“At this late stage I think that’s the risk we’re running,” he said. “You can’t just turn on a dime with 35 million borrowers who all have different loan types and statuses.”