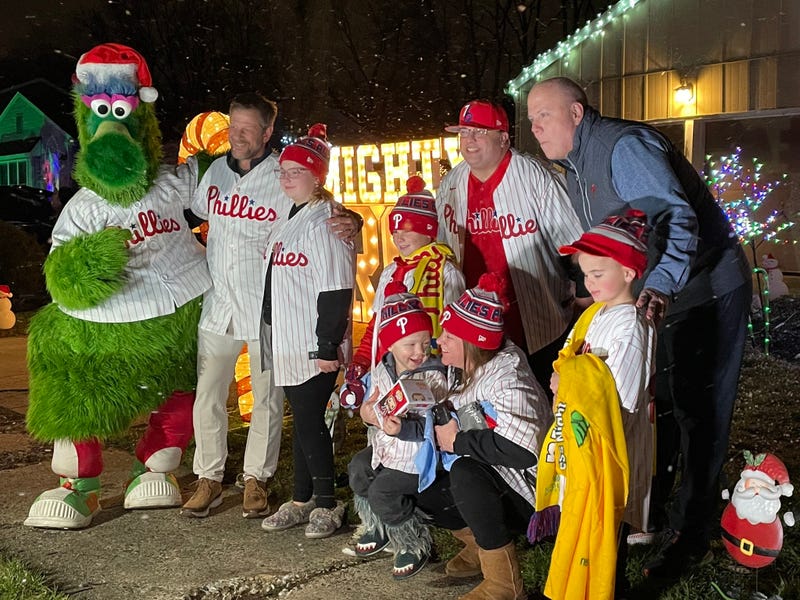 Aaron Kline and his family gather for a picture with the Philly Phanatic and Phillies TV voice Tom McCarthy, on a special night for the 4-year-old boy from Mount Laurel who is battling a recently-removed brain tumor. Photo credit Nina Baratti/KYW Newsradio
By Nina Baratti, KYW Newsradio

MOUNT LAUREL, N.J. (KYW Newsradio) — A 4-year-old boy from South Jersey is undergoing intensive treatment to beat a malignant tumor. Thursday night, he was surprised with a parade of support.

“Mighty Aaron! Mighty Aaron!” fans chanted as brave and happy Aaron Kline was all joyful laughs. It was hard to miss his beaming smile.

He and his family were surprised with a decorated lawn for the holidays, plus a parade complete with lights, snow, Paw Patrol, Phillies play-by-play announcer Tom McCarthy, former Phillies second baseman Mickey Morandini and the Phanatic.

Guaranteed to put a smile on your face: Mighty Aaron can’t contain his excitement to meet Paw Patrol @KYWNewsradio pic.twitter.com/e5mppUcOp1

“It just helps uplifts his spirit,” said Marc Kline, Aaron’s father. “You can see the joy in his face, and it’s just amazing to see his reaction.”

Doctors recently removed a tumor from Aaron's brain, and they have been fighting to keep it from coming back. 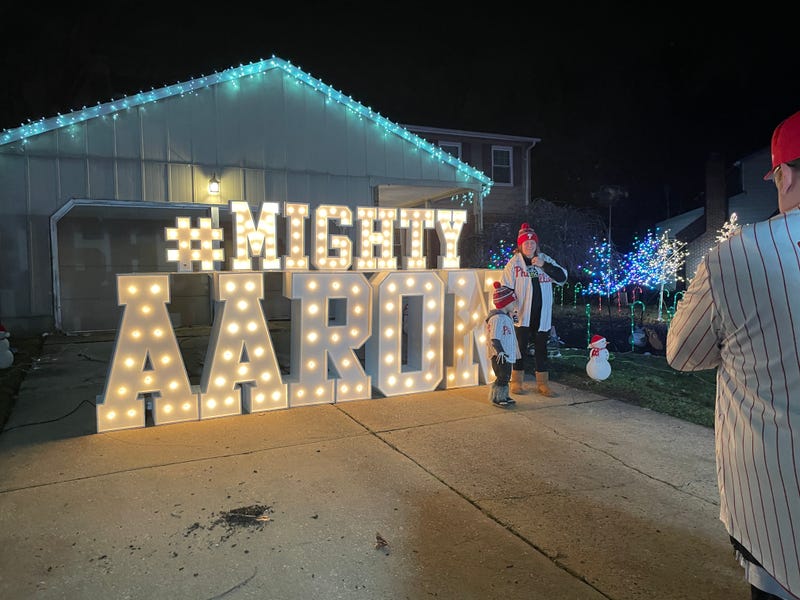 "Mighty Aaron," a 4-year-old boy battling brain cancer, got a special night from the Philadelphia Phillies including a parade thrown in his honor. Photo credit Nina Baratti/KYW Newsradio

“Seeing how he is now, and knowing in like a week or so he’s going to be not feeling so great, it’s always good to see when he does feel good,” Aaron's mother Shana Kline said.

A winter wonderland surprise for 4-year-old MIGHTY Aaron. He’s battling brain cancer and has a parade of support from family, friends, neighbors, the Phanatic, and so many more. @KYWNewsradio pic.twitter.com/vsHKr0D4rD

Aaron is about halfway through an intense treatment process, which will require him to be in the hospital for a few more weeks during a time that will span the holidays.

Sharon Snyder with Kisses for Kyle, a Philadelphia-area charity that offers financial assistance and special experiences for kids battling cancer, nominated Aaron to the Philadelphia Phillies to make the surprise happen.

“He had no idea. He has no idea what’s about to happen,” Snyder said before the party began. “Seeing that we’re bringing some level of happiness during such tragic times really helps my heart.”

Great night at the Kline House today celebrating Mighty Aaron and his family. What an effort by the folks at @IBEW98 from Citizens Bank Park, Mickey Morandini, the @mountlaurelpd Mount Laurel Fire Department, the @LenapeBand and countless others! @Kissesforkyle @Phillies pic.twitter.com/GyBrpDkcf3

Friends and neighbors like Melissa Jost lined the street to help cheer mighty Aaron on.

“You would never know what he’s dealing with,” said Jost. “He’s just such a light of energy and excitement and such an inspiration to so many of us.” 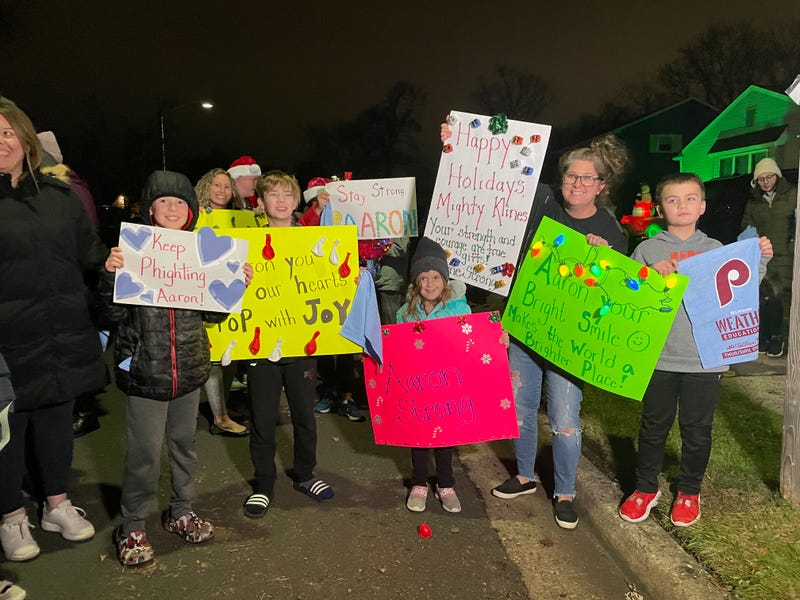 Friends and neighbors giving a special night to "Mighty Aaron," a 4-year-old from Mount Laurel who is battling a brain tumor. Photo credit Nina Baratti/KYW Newsradio

Marc said he's grateful that "Mighty Aaron" has the support of his community.

“It just shows you that the holiday spirit is alive,” Marc said, “and I appreciate everything that everybody is doing for us.”