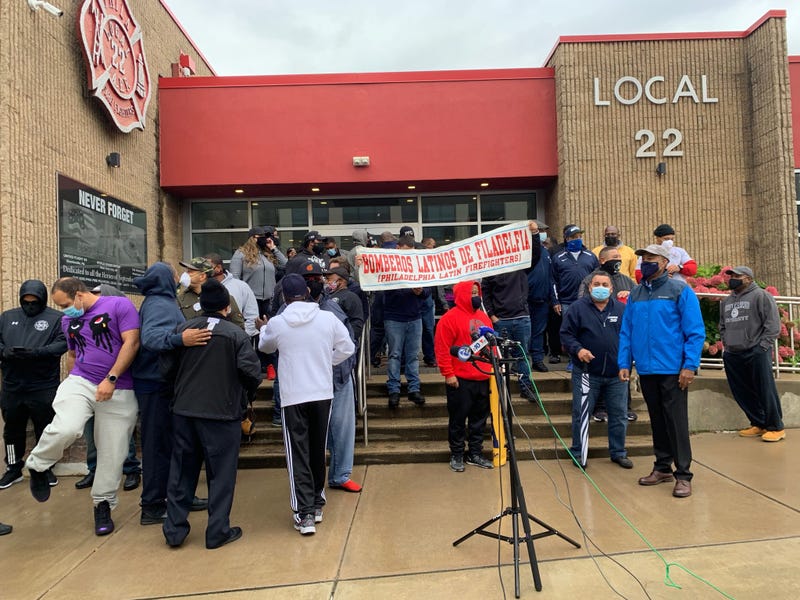 About 100 Philadelphia firefighters staged a protest outside the Philadelphia Firefighters’ and Paramedics’ Union Local 22 on Oct. 2, 2020, targeting their own union for its endorsement of President Donald Trump. On the national level, the union endorsed Democratic candidate and former Vice President Joe Biden. Photo credit Pat Loeb/KYW Newsradio
By Pat Loeb, KYW Newsradio 1060

PHILADELPHIA (KYW Newsradio) — About 100 Philadelphia firefighters staged a protest Friday morning, targeting their own union for its endorsement in the presidential election.

The International Association of Fire Fighters endorsed Democratic candidate and former Vice President Joe Biden more than a year ago, but this week, the Philadelphia Firefighters’ and Paramedics’ Union Local 22 announced its support for President Donald Trump.

Protesters like Deputy Chief Girt Allerton said that was an overstep by union leadership.

“They took this action without the consent or the vote of the general membership and did not represent the overwhelming majority of these bodies standing here,” he said.

#Philly firefighter protest of their union is underway pic.twitter.com/4ytMYr6tXN

No one in the union leadership was available for comment.

According to Lisa Forrest, president of Club Valiants, a fraternal society for minority firefighters, the executive board claimed the endorsement was based on a survey that went out to about half of the 4,700 members. About 500 members responded.

Forrest said the survey didn't mention an endorsement but instead asked members who they plan to vote for.

“Some people saw the survey and didn't fill it out because they felt like it was none of Local 22’s business who you were voting for,” she said. “Even the members of the board, from what I'm hearing, felt like they were deceived themselves. They didn't know this would lead to an endorsement originally, and then once they found out, they asked (Local 22) President (Mike) Bresnan not to do it.”

Forrest and other speakers were careful not to be partisan. They demand the endorsement be rescinded, not changed.

The endorsement had put Local 22 in the Trump campaign's spotlight. The president was scheduled to visit and thank them on Sunday, but the event has been canceled since he tested positive for COVID-19.