PHILADELPHIA (KYW Newsradio) — Walter Wallace Jr.’s parents are speaking out just two days after their son was shot and killed by police. KYW Newsradio spoke to them in their first sit-down interview since the shooting on Monday, and they are calling for changes to be made.

“I don’t want my son to have died in vain like he wasn’t nothing, like he didn’t come from a good family,” said Walter Wallace Sr. and his longtime partner Cathy Brant. The two have been together for 28 years, and they are still processing the death of their 27-year-old son.

“I just pray every night to stay strong,” said Brant. “It’s only by the grace of God that I’m still standing.”

Brant was seen on video trying to save her son’s life during an incident outside their home on 61st and Locust streets. Walter Jr. had a knife and was running toward police with the weapon. She chased her son, pleading with him.

Police then shot Walter Jr. multiple times and he fell to the ground. It’s at the moment that Brant began wailing at a pitch that is hard to forget.

“It felt like something was ripping my soul from me,” she said.

But that painful moment is not what they want the world to remember about their son.

“He had a generous heart,” said Walter Sr. “He would take the shoes off his feet and give them to somebody.”

They said Walter Jr. recently married and was a father of eight — in fact, his youngest child was born Oct. 28. Walter Sr. said his son had dreams of being a rapper, and while he drove for Uber Eats, he had just gotten an interview for a more permanent job. 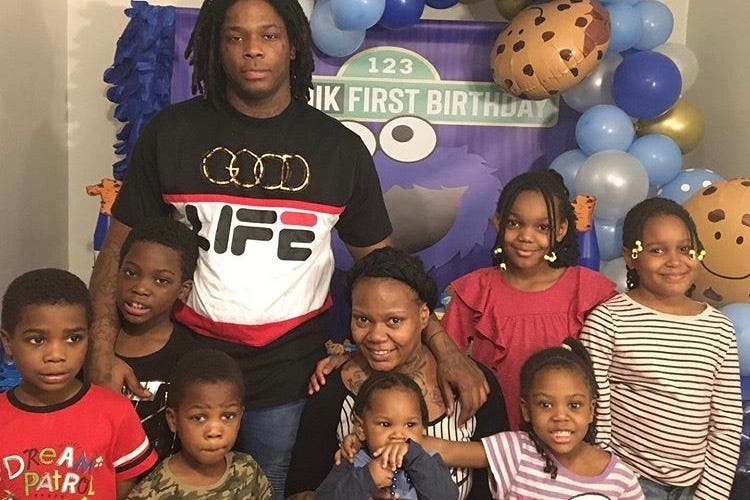 “He had a dream of doing something good, and his dream didn’t last so long,” said Walter Sr.

In fact, his latest song spoke about civil unrest and the aftermath of the death of George Floyd. His parents said he would not approve of looting. And neither do they.

“We appreciate the good people who have been praying and all the outreach,” said Walter Sr. “As for the looting and tearing up the city, please come together and stop hurting the community where we all live.”

They also want the world to know that their son, who has a twin sister, was not ashamed of his mental illness.

“He was going to the counselor,” explained Walter Sr. “He was taking his medicine, it was nothing to be embarrassed about.”

But they still feel some guilt.

Their older son called the police after Brant tripped while trying to calm Walter Jr. down. They said they asked for an ambulance, but police showed up instead.

The police seemed to laugh at the situation, they said, and hours later, things escalated and Walter Jr. ended up shot.

The family said they only wanted the officers to help.

“Try to talk to him, calm him down, tase him if you have to,” said Brant regarding what she wished had happened Monday. “But don’t shoot him down like a dog. That was wrong, that was wrong.”

One such reform could be to bring in someone besides police to help when a person is in mental health crisis.

“To call another officer who specializes in mental illness,” said Walter Sr.

Another option, they said, is to ensure that all officers are Taser trained and use nonlethal force in cases like Walter Jr.’s.

The family is represented by attorney Shaka Johnson, who said they will balance the need to bury their son with the need to pursue justice.