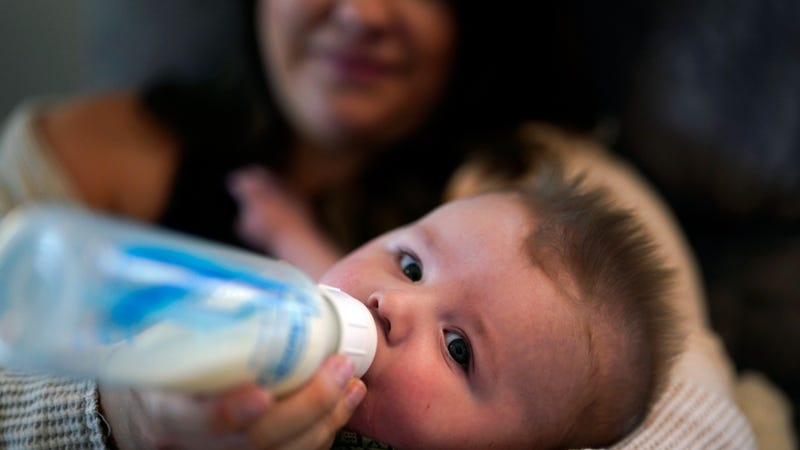 Ashley Maddox feeds her 5-month-old son, Cole, with formula she bought through a Facebook group of mothers in need Thursday, May 12, 2022, in Imperial Beach, Calif. Photo credit Gregory Bull/AP Photo
By The Associated Press

WASHINGTON (AP) — President Joe Biden stepped up his administration's response to a nationwide baby formula shortage Thursday that has forced frenzied parents into online groups to swap and sell to each other to keep their babies fed.

The president discussed with executives from Gerber and Reckitt how they could increase production and how his administration could help, and talked with leaders from Walmart and Target about how to restock shelves and address regional disparities in access to formula, the White House said.

The administration plans to monitor possible price gouging and work with trading partners in Mexico, Chile, Ireland and the Netherlands on imports, even though 98% of baby formula is domestically made.

As vulnerable parents in Pennsylvania struggle to feed their newborns, Attorney General Josh Shapiro issued a warning to consumers to be mindful of scammers.

Scammers love to take advantage of product scarcity and vulnerability. If you're purchasing baby formula online, be cautious – make sure it's from a trusted source. And if you believe you've been scammed, file a complaint with my office. https://t.co/AoqNn75TmT

"If you're purchasing baby formula online, be cautious," he wrote. "Make sure it is from a trusted source. And if you believe you've been scammed, file a complaint with my office."

The problem is the result of supply chain disruptions and a safety recall, and has had a cascade of effects: Retailers are limiting what customers can buy, and doctors and health workers are urging parents to contact food banks or physicians' offices, in addition to warning against watering down formula to stretch supplies or using online DIY recipes.

The shortage is weighing particularly on lower-income families after the recall by formula maker Abbott, stemming from contamination concerns. The recall wiped out many brands covered by WIC, a federal program like food stamps that serves women, infants and children, though the program now permits brand substitutes. The Biden administration is working with states to make it easier for WIC recipients to buy different sizes of formula that their benefits might not currently cover.

About half of infant formula nationwide is purchased by participants using WIC benefits, according to the White House.

Clara Hinton, 30, of Hartford, Connecticut, is among that group. She has a 10-month-old daughter, Patiennce, who has an allergy that requires a special formula.

Hinton, who has no car, has been taking the bus to the suburbs, going from town to town, and finally found some of the proper formula at a box store in West Hartford. But she said the store refused to take her WIC card, not the first time that has happened.

Hinton said her baby recently ran out of formula from an already opened can she got from a friend.

"She has no formula," she said. "I just put her on regular milk. What do I do? Her pediatrician made it clear I'm not supposed to be doing that, but what do I do?" 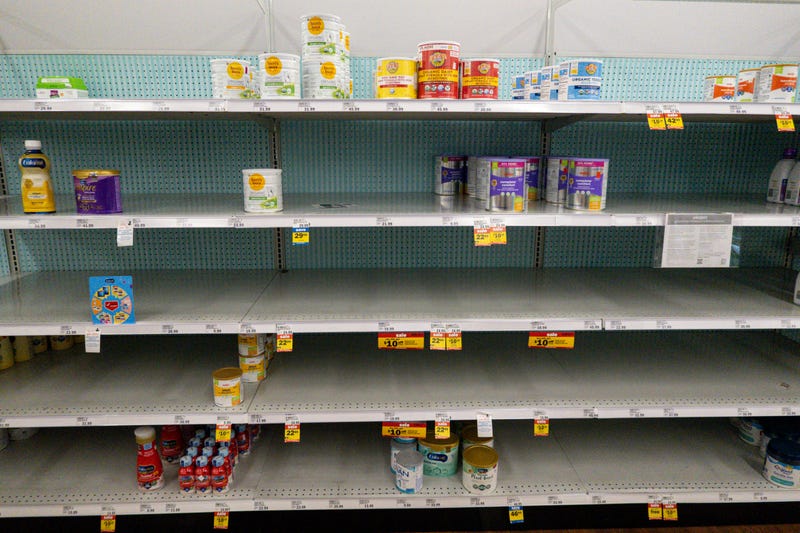 In Utah, fellow WIC card holder Elizabeth Amador has been going store-to-store every day after she finishes work at a call center in Salt Lake City in desperate search of one particular formula her 9-month-old daughter needs. She recently was down to only one can, but had four cans on Thursday. She said she won't stop her cumbersome daily routine until she knows the shortage is over.

"It sucks, you know because of high gas prices," Amador said. "We're having to drive everywhere to find formula. It's stressing."

Ashley Maddox, a 31-year-old mother of two from San Diego, started a Facebook group on Wednesday after failing to find formula for her 5-month-old son, Cole, at the commissary on the Navy base.

"I connected with a gal in my group and she had seven cans of the formula I need that were just sitting in her house that her baby didn't need anymore," she said. "So I drove out, it was about a 20-minute drive and picked it up and paid her. It was a miracle."

She said there was already a stigma attached to being a non-breastfeeding mom and that the group has become supportive. "To not be able to have that formula, it's scary," she said.

Jennifer Kersey, 36 of Cheshire, Connecticut, said she was down to her last can of formula for her 7-month-old son, Blake Kersey Jr., before someone saw her post on a Facebook group and came by with a few sample cans. She said she and others in the group are helping each other, finding stores that might have the formula in stock and getting it to mothers who need it.

"At first I was starting to panic," she said. "But, I'm a believer in the Lord, so I said, 'God, I know you're going to provide for me' and I just started reaching out to people, 'Hey do you have this formula?'"

Kimberly Anderson, 34, of Hartford County, Maryland, said her 7 1/2-month-old son takes a prescription formula that has been nearly impossible to find locally. She turned to social media and said people in Utah and Boston found the formula, which she paid to have shipped.

"They say it takes a village to raise a baby," she said. "Little did I know my village spans the entire U.S. as I ping friends, family for their zip codes so I can check their local Walmarts to have them ship directly to me."

Shortages of basic goods have been a problem since the start of the coronavirus pandemic. Access to medical supplies, computer chips, household appliances, cars and other goods has been hurt by closed factories and outbreaks of the virus, as well as storms and other climate-related events.

Parents desperately searching for infant formula on retailer websites such as Amazon and Google are being served up with products intended for toddlers, including powdered toddler goat milk and plant-based milk powders.

One banner ad across Amazon offers "organic non GMO formula for babies & toddlers," but a closer inspection of the product's image shows that it is only intended for children over 12 months. Other ads for toddler milk appear on Amazon's website on pages for out-of-stock infant formula.

"It's not like you're buying a pair of shoes. This is a little bit more serious," Fleming-Milici said. "It's serving up something that you should not be giving to your child."

Dr. Navneet Hundal, a pediatric gastroenterologist at Massachusetts General Hospital in Boston, said she and other pediatricians have been grappling with the formula shortage for months. Formula companies have stopped giving out samples that she could pass on to parents, she said. She advises new parents to talk to their pediatricians to see if there are other brands of formula that they can safely give their newborns.

"This is ruling our clinical practices right now," she said.

A safety recall compounded the challenges.

The Food and Drug Administration warned consumers on Feb. 17 to avoid some powdered baby formula products from a Sturgis, Michigan, facility run by Abbott Nutrition, which then initiated a voluntary recall. According to findings released in March by federal safety inspectors, Abbott failed to maintain sanitary conditions and procedures at the plant.

The FDA launched its investigation after four babies became sick with a rare bacterial infection after consuming formula manufactured at the plant. All four were hospitalized and two died. Chicago-based Abbott said in a statement, "there is no evidence to link our formulas to these infant illnesses." Samples of the bacteria collected from the infants did not match those found in the company's factory, Abbott noted.

Abbott said that pending FDA approval, "we could restart the site within two weeks." The company would begin by first producing EleCare, Alimentum and metabolic formulas and then start production of Similac and other formulas. Once production began, it would take six to eight weeks for the baby formula to be available on shelves.

On Tuesday, the FDA said it was working with U.S. manufacturers to increase their output and streamline paperwork to allow more imports.

"We recognize that this is certainly a challenge for people across the country, something the president is very focused on and we're going to do everything we can to cut red tape and take steps to increase supply," White House press secretary Jen Psaki told reporters.

Meanwhile, the shortage got politicized Thursday as Republicans including Texas Gov. Greg Abbott criticized the Biden administration for providing baby formula to babies in detention at the U.S.-Mexico border.

Biden, in a Thursday letter to the Federal Trade Commission, pressed the independent agency to "bring all of the Commission's tools to bear" to investigate and act in response to reports of fraud or price gouging as a result of the supply disruptions.

"It is unacceptable for families to lose time and spend hundreds of dollars more because of price gougers' actions," he wrote to FTC Chair Lina Khan.