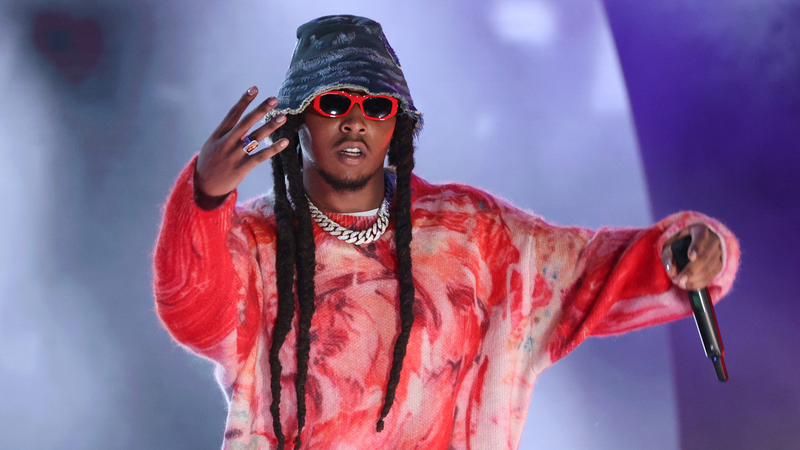 Migos rapper Takeoff is planning to takeoff to “space,” and looking to bring one NFT owner on the trip with him.

That’s right, Takeoff’s new NFT platform, Apes In Space, has intergalactic plans for one lucky person who owns a non-fungible token. Of which opportunity details were posted about on Instagram.

“The Apes in Space project will take one of their holders to space alongside @yrntakeoff. One lucky owner will get to meet Takeoff in real-life and join him on a journey to space”

The post’s caption additionally stated the project will kick off on December 5 with the Pre-Sale and on December 6 with the Public Sale. And went on to note, “You can start preparing your MetaMask wallets with Ethereum ahead of launch, as this will be the only way to purchase a Space Ape.

Having severe trust issues and also because we’re talking about a trip to the freaking moon, we join the group of fans speculating whether or not it could be an actual trip with Takeoff into outer space through a company such as SpaceX, or if it’s simply a digital journey into the metaverse.

Curious we went searching for answers, and here’s what we found. According to the official Apes In Space site, the "High In Space Takeoff" is implied as “a real-life space journey,” that “one lucky Apes in Space holder will join…" and “get to meet the Migos rapper in person and become the first person to orbit in space with one of the most talented artist in the space.

Still not sold, but we’ll play along. If leaving the Earth's stratosphere isn’t your cup of tea, there are several other prizes up for grabs. Including four VIP concert tickets to a future Migos concert, $25,000 in Ethereum and the opportunity to own a piece of land in the metaverse.

With every connection in the NFT environment promoting the project, Apes In Space is on track to reach its goal of becoming “the fastest-growing community in the crypto space.” So, are you ready for TAKEOFF? If so, do as Apes In Space says and “join Discord today to reserve your seat on your trip to the Moon!”