Canseco, who accused McGwire and several other baseball stars of abusing performance-enhancers in his infamous 2005 best-selling book "Juiced," took to social media to level another wild allegation against his former "Bash Brother."

According to Canseco, Big Mac not only gained an unfair advantage from his use of PEDs -- but also "corked his bat before every game."

Mark McGwire corked his bat before every game

Former White Sox and Marlins manager Ozzie Guillen, who played against both Canseco and McGwire during his own playing career, registered his skepticism that McGwire would have the time to cork his bat every day.

before the game ? he got his on factory? maybe he use cork bat but doe that every day dont know about that

Bat-corking is an inexact science, but it typically entails hollowing out the inside of the bat and filling it with a "bouncier" material, in order to give a well-struck ball a little extra distance off the bat.

In 2010, McGwire fessed up to taking anabolic steroids intermittently throughout his career, claiming it was mostly for "health purposes" and that he didn't think he needed the juice to help him hit home runs.

McGwire was one of about a dozen prominent baseball stars who famously testified before Congress in March 2005 regarding the use of steroids in the game. 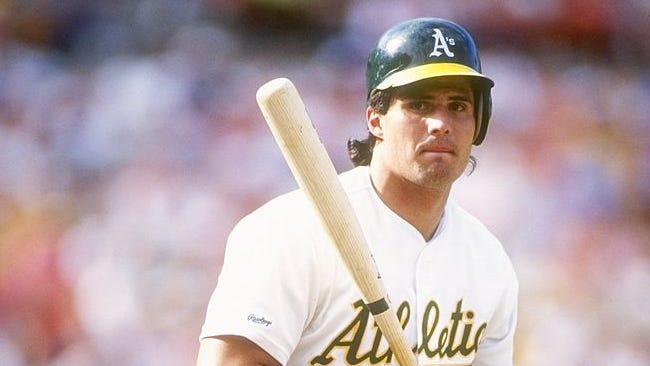 The feared slugger, who finished his career with 583 homers -- including a then-record 70 bombs he recorded with the St. Louis Cardinals amid the thrilling 1998 home run chase -- declined to answer lawmakers' questions, which for many discerning fans represented an admission of guilt.

McGwire had previously acknowledged using performance-enhancers such as androstenedione, now a banned substance, during the '98 chase.

Some fans and baseball observers on social media took the humorous route in response to Canseco's bold claim on Friday.

Good. Otherwise we wouldn't have this. https://t.co/tFSzecGh0X

Wow thanks for ruining my childhood by destroying the purity of early 90’s baseball Jose.