With another round of cuts expected sometime this week, Bruins coach Jim Montgomery made it clear Monday morning that “the time to impress is right now” for anyone on the roster bubble.

Unfortunately, not many players took advantage of their opportunity Monday night. The Bruins looked flat pretty much all night in a 1-0 loss to the New Jersey Devils, and a whole bunch of players battling for third- and fourth-line jobs did little to help their cases.

Where Bruins' roster battles stand after loss to Devils

The Bruins’ stars sat this one out, as did a couple veteran bubble players in Nick Foligno and Chris Wagner. That meant the door was open for a number of younger players to stake their claims. Few did.

Trent Frederic was back in his usual third-line spot with Charlie Coyle and Craig Smith after getting demoted in favor of A.J. Greer last week. If that demotion had given Frederic a kick in the pants, it didn’t really show on Monday. In what has become a trend this preseason, Frederic was inconsistent, mixing some strong shifts with too many quiet ones. He finished with one shot on goal in 17:10.

Speaking of Greer, he followed up his two-goal breakout last Tuesday with a much quieter night, registering two shots on goal and one hit while also taking a penalty.

That came despite Greer being reunited with Jack Studnicka and Marc McLaughlin, which is the line that lit up the Rangers a week ago. McLaughlin was coming off his own two-goal performance on Saturday, and Studnicka was looking to build on his two-assist game from last week.

All three had a tougher go of it Monday, resulting in a pretty big missed opportunity. The fact that Montgomery had reunited those three seemed to suggest that he was at least considering the possibility that this could be his fourth line to open the season, and was maybe even leaning that way.

Another strong outing -- even without someone necessarily scoring two goals again -- could have gone a long way towards locking that in. Instead, they left the door open for other challengers.

A couple of those challengers, however, had tough games of their own Monday night. Tomas Nosek, playing wing instead of center for the first time this preseason, had a goal waved off due to a goalie interference committed by Greer, but otherwise put forth another underwhelming performance. He had a couple misplays at the offensive blue line that led to offsides and didn’t register a shot on goal. In 34 five-on-five minutes this preseason, Nosek has one shot attempt.

Oskar Steen didn’t have a single shot attempt and took a penalty (he also drew a penalty). He has one shorthanded goal to his name this preseason, but otherwise it wouldn’t appear he’s done enough to make the team, even if cutting him means another team could claim him off waivers. Johnny Beecher was quiet as well, and seems increasingly destined to begin the season in Providence, despite a two-goal game on Saturday.

The Bruins ran into travel issues Monday and got to Jersey late. But while that may have excused a slow start, it doesn’t excuse 60 minutes of lackluster hockey.

Asked in his postgame interview with NESN who stood out to him in a positive way, Montgomery named Jakub Lauko and Dan Renouf, two players who don’t figure to be under serious consideration for opening night roster spots. He probably could have thrown in Craig Smith (game-high five shots on goal), Jack Ahcan (smooth play from the back end and a team-high 22:19 time on ice) and goalie Keith Kinkaid (20 saves on 21 shots before leaving with an injury).

The fact that he couldn’t, in truth, name any of the forwards on the bubble, just hours after laying out what was at stake, had to have been disappointing.

"We just gave up too many high-quality chances," Montgomery said after the game. "We were just slow to pressure pucks and we were slow to transition to offense. Overall, I don't think there's much to take away that would be really positive for this game."

Now there are just two preseason games left. Foligno and Wagner will presumably draw back into the lineup on Wednesday and get another chance to state their case, now with more of an opening than it may have seemed 24 hours ago.

Another player who just got even more interesting, assuming he plays Wednesday, is top prospect Fabian Lysell, who is currently day-to-day with a minor injury. Lysell seemed destined to start the year in Providence, but now there is a temporary opening in the Bruins’ top six with Taylor Hall week-to-week with an upper-body injury.

As we just laid out, no one made a case to jump up into that kind of role on Monday, with the possible exception of Smith.

After several games where players like Greer, Studnicka and McLaughlin reshaped these roster battles and gave the Bruins’ coaches and front office a lot to think about, Monday night just kind of came and went with no one doing much of anything to change or re-enforce their status.

The Bruins will hope Wednesday night is a bit more interesting. 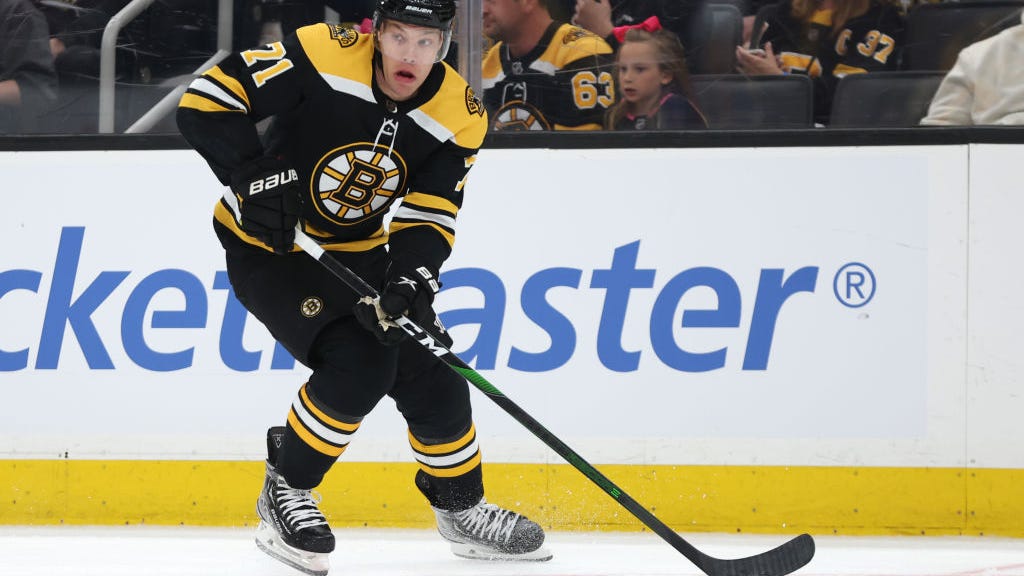