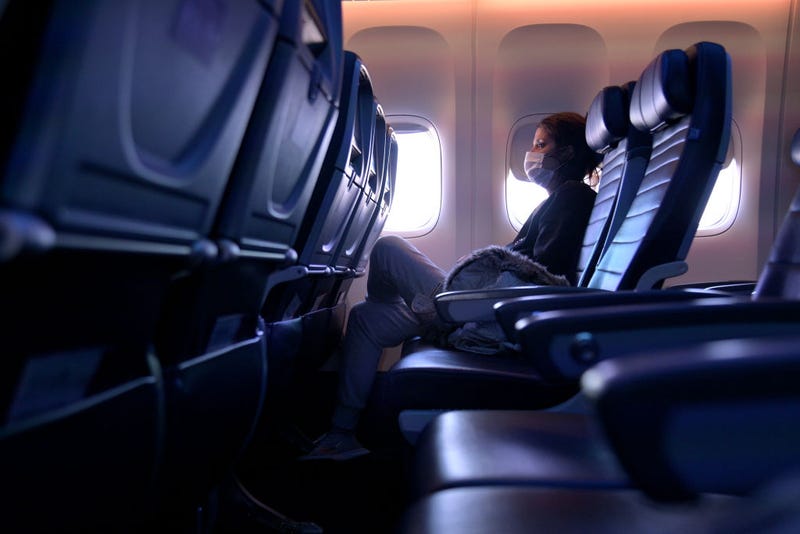 A masked passenger is seen seated on a flight from San Francisco, California to Newark, New Jersey on October 27, 2020. Although virus dissemination on flights is low when people are able to be socially distant, the extremely hard hit airline industry is having to consolidate flights, furthering complicating the dilemma. (Photo by Michael Loccisano/Getty Images) Photo credit Getty Images
By Lauren Barry, KYW Newsradio

In an effort to mitigate the spread of the delta and omicron variants of COVID-19, a mask mandate for transportation will be extended through March 18.

According to The Washington Post, this requirement covers airplanes, trains, buses and other modes of transportation. In January, President Joe Biden issued an executive order calling for the transportation mask mandates.

“On domestic, I think, as I said, the masking requirement is in place already, and, in fact, we will be extending that requirement from January to — extend it all the way until mid- March,” said a senior administration official Wednesday of masking for air travel.

Previously the mandate, which is enforced by the Transportation Security Administration, was set to end Jan. 18 of next year. TSA fines for violating mask mandates have ranged from $500 to $3,000 since September.

With the first case of omicron in the U.S. identified that day, many are concerned of another surge in cases such as the one caused by the delta variant this summer. The omicron variant has around 50 mutations and could spread quicker than other strains of the virus.

Studies have shown that masking works to reduce the spread of COVID-19, but some people refuse to wear them and mask mandates been controversial at local and federal levels. Airlines have also seen a rise in the number of onboard incidents related to travelers not adhering to mask mandates.

As of Nov. 30, the Federal Aviation Administration had reported 3,923 mask-related incidents on flights. There has been a huge spike in overall unruly passenger incidents since the pandemic began.

In addition to the extended mask mandate, all international travelers will be required to test negative within one day of their departure to the U.S., regardless of nationality or vaccination status, said a Biden administration official.

Other steps the administration has taken to prevent the spread of omicron was a travel ban on eight African nations, including South Africa, where omicron was first identified.

What’s the status of the COVID-19 vaccine mandate in the US?