Ahead of the Day Shift release, the co-stars sat down with Audacy’s Big Tigger and Shamea Morton to discuss the anticipated movie as well as their future endeavors. “This is a special movie. For one I get a chance to work with a young man that I’ve been clockin’ for a long time,” Foxx tells The Big Tigger Morning Show. “…When we were talking about who should be opposite me in the film, I said this character Seth has to be Dave Franco. I said 'I won’t even do the movie if Franco wasn't in it’,” he continued.

“Truthfully, obviously the feeling is so beyond mutual,” Franco expressed. “I’ve really been such a huge fan for so long. [Jamie Foxx] he’s one of these actors who’s so giving and he recognizes that for a movie to be good everybody’s got to be good. He really builds everyone up around him and as an actor when you have a safe space, you do your best work.” 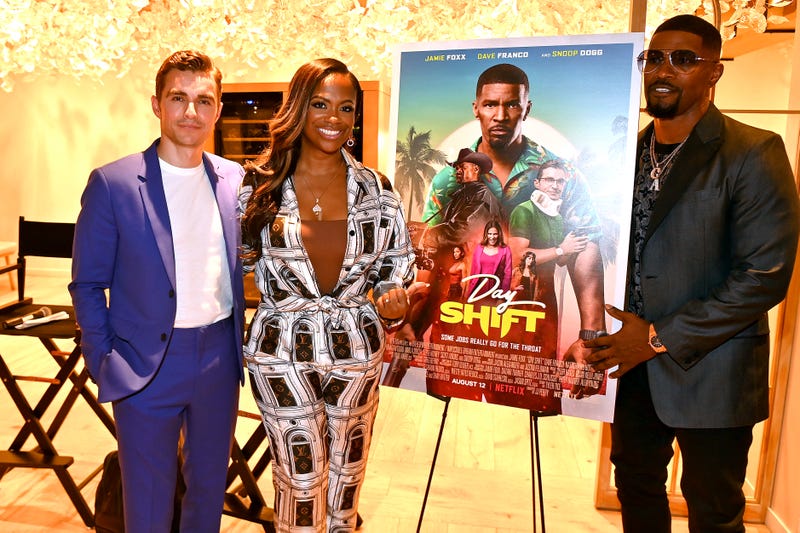 Also starring Snoop Dogg, Day Shift is a lighthearted yet stunt-filled movie that centers pool cleaners who double as vampire hunters. Filmed in Atlanta, the cast worked with a highly skilled stunt team to perform their own stunts. Moreover, the film’s director previously orchestrated stunts for the Fast and The Furious and John Wick franchises. “This was the first time I really got crazy, where I really got into it,” said Foxx, adding that he wasn’t too fond of performing stunts in earlier films.

Over the years, Foxx has become a bona fide movie star, with several awards including an Oscar, Golden Globe, and a Screen Actors Guild Award. Conversely, the 54-year-old entertainer revealed that he’s returning to stand-up comedy soon. “I’m going back out," said Foxx “I never really left doing stand-up. I’m always doing stand-up just not efficiently. But I've been just testing the waters and [doing] impersonations…” Interestingly, Foxx says his top impersonations at the moment are Donald Trump, Chris Rock, Floyd Mayweather and JAY-Z. “I’m going to the [comedy] clubs that I started out at. So it will be up close. Up close I kill em’... I’m going to have some real material. It’s going to be fun.”

Foxx actually began doing stand-up comedy in the third grade. At the time, his teacher and grandmother brokered a deal where he could do stand-up for five minutes on Fridays after school. When it comes to today’s culture, he feels as though comedy and entertainment is the last thing we’ve got and we shouldn't police ourselves.

Check out the full interview on The Big Tigger Morning Show above.