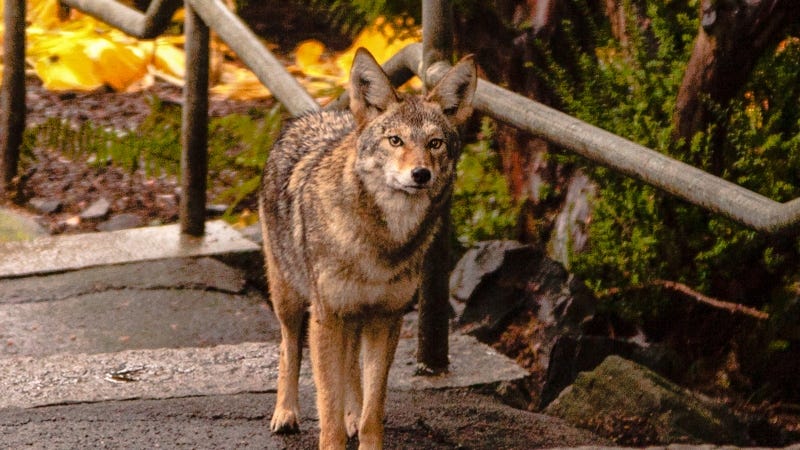 Recently a 9-yr-old girl in Georgetown (Terra Vista area) was outside in front of her house rollerblading, and thought a dog was coming to her. It was a coyote. She ended up getting bit on the leg, has bruises from falling and taking rabies vaccinations. Thankfully she's recovering physically, although she hasn't been able to sleep in her own bed.

According to Texas Parks and Wildlife, coyotes don't normally attack humans, but we should be prepared just in case. Coyotes are always looking for food, water and shelter. They associate those things with humans. This time of year males also tend to have higher testosterone levels during mating season.

A coyote's quick bite is considered an ' investigative bite', trying to figure out if it's a food source. Many coyote aggression reports tend to happen after they have gotten food from someone, or food thrown to lead them away or thrown at them. They view this as intentional feeding.

DON'Ts & DOs:
DO NOT FEED COYOTES OR THROW SANDWICHES AT THEM! Texas Park and Wildlife peeps have run across sandwich throwers. Seriously don't!

Kelly Simon, an Urban Wildlife Biologist with Texas Parks and Wildlife, says coyote attacks are rare. Simon says the coyote may have been looking for food, as the animal doesn't normally hunt humans. https://t.co/chRcmZaCMU

I lived off SW Pkwy for years in ATX. There was a pack of coyotes that walked past our patio often. One night honey Ted & I heard high pitched squeals and lots of howling and growling. It was pretty frightening. The next day honey Ted saw the remains of a skunk. Apparently the squeal came from a coyote that got sprayed by the skunk. Unfortunately, the skunk couldn't keep several coyotes away. We made sure our Shih Tzu, Rudy Roo was inside, and away from them. They never bothered us, but we had to be mindful.

The new place we call home now off Brodie Lane has it's share of coyotes too. We all live together. We must stay aware and mindful. If they get out of hand, contact the professionals.