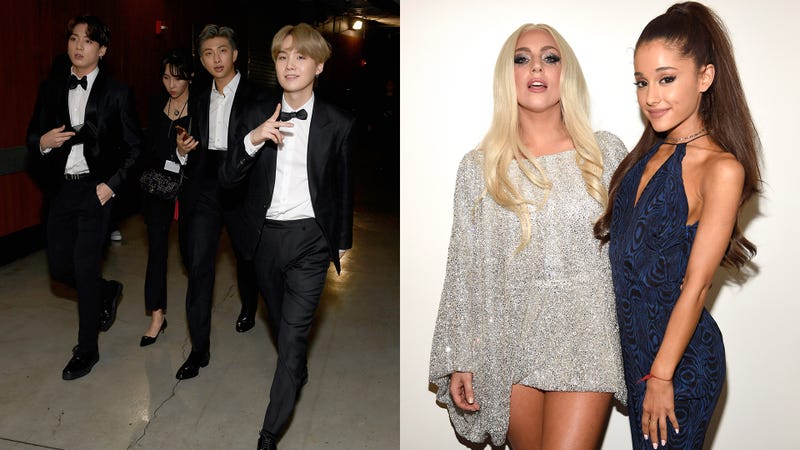 The 2021 GRAMMY Awards are just days away and there’s perhaps no category with greater star power than the Best Pop Duo/Group Performance.

While you have a superstar group in BTS as part of this year’s nominees, the other musicians in the category include several collaborations of high profile artists. From tandems like Lady Gaga and Ariana Grande, Taylor Swift and Bon Iver, and Justin Bieber and Quavo, to the quarter of J Balvin/Dua Lipa/Bad Bunny/Tainy, the category is filled with artists that can easily make a claim for the award.

As one of the newer categories to the GRAMMY Awards having been introduced in 2012, the award celebrates the best pop recordings by a duo/group or collaborative performance.

Who will be the big winner of the Best Pop Duo/Group Performance category at the 2021 GRAMMY Awards? We’ll find out when the award show airs on Sunday, March 14 on CBS, but in the meantime cast your vote below for who you think will win.

The quartet’s collaboration holds the distinction of appearing on two different releases. It was first featured on J Balvin’s 2020 EP Summer Vacation and then on Dua Lipa’s recent reissue Future Nostalgia: The Moonlight Edition. The international superstars combine the strengths of their pop and reggaeton sounds to create this track we can’t stop listening to.

This marks Bieber and Quavo’s third collaboration together as the two debuted the song together on Saturday Night Live in February 2020. While it’s up for an award in this pop category, the song is pure R&B and debuted at the number one spot on the Hot R&B Songs chart. The song peaked at the number five spot on the Billboard Hot 100 giving Bieber his 18th top ten single and Quavo his sixth.

“Dynamite” holds the distinction of being the only entry in this category from a band and not from a group of individual performers. “Dynamite” exploded onto the scene as it set the YouTube record for most views in a 24-hour period. Additionally, it was the first time BTS earned a number one debut on the Billboard Hot 100 chart.

Lady Gaga with Ariana Grande - Rain on Me

If you want to get the dance floor bumping all you need to do is throw on this track. The upbeat disco/house/pop fusion was a total jam and became one of the most listened to songs of summer 2020. The song debuted at number one on the Billboard Hot 100 chart and has already been certified platinum.

Who said a gospel folk ballad can’t make for a great pop song? “Exile” stands out as one of Swift’s best songs from her surprise album folklore and is considered one of her best collaborations in her career. The song debuted at number six on the Billboard Hot 100 chart and is her third career nomination in this GRAMMY category.