(SportsRadio 610) - The Texans know if they want to thrive defensively this season and make that a definitive part of their identity going forward, a point of emphasis is going to be creating pressure on the quarterback.

It’s a major complimentary facet to that side of the ball that is looking like it already could boast a significantly improved secondary with the additions of cornerback Derek Stingley Jr. and safety Jalen Pitre. 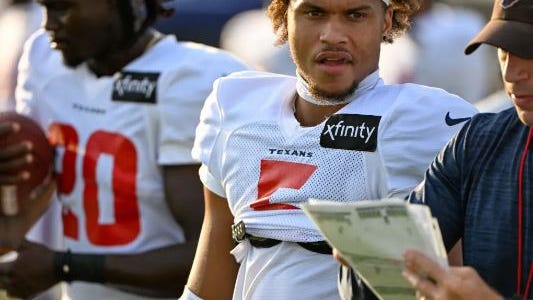 The Texans made it a priority to address defense all offseason, whether it be via the draft or free agency.

Texans third-year pro, defensive end Jonathan Greenard, is one of those guys.

He led the team with eight sacks in 12 games last season, but was also a part of a unit that finished near the bottom of the league in almost all team defensive categories, despite ranking 12th in takeaways with 25.

A small but encouraging sign the Texans may at least be cooking from the right cookbook, but still missing a few ingredients.

But Greenard, back healthy now for the team after offseason foot surgery, figures to be more a part of the solution after a breakout season last year.

The Texans brought in edge rusher Ogbonnia Okoronkwo on a one-year deal.

Drafted by the Rams in 2018, Okoronkwo had a difficult time finding opportunities with a defensive line that at different points consisted of Aaron Donald, Michael Brockers, Sebastian Joseph-Day and Ndamukong Suh during his time in Los Angeles.

The Texans hope he fills a void in the pass rush and seizes an opportunity on a team that is trying to build and create an identity, and Saturday’s performance against the Saints (four tackles, and one sack) was a good start.

The 25-year-old looks to take another big step in his development as he’s had the opportunity to now go against two of the best left tackles in football, in both Duane Brown and Laremy Tunsil.

“I feel like my hands have been sharper,” Green said. “My keys have been more on point because with guys like Duane and guys like Laremy, your rush always has to be on point from the get-off to your hand placement to how violent your hands are.”

Defensive ends Mario Addison and Jerry Hughes signed deals with the Texans this off-season. They’ve spent a combined 25 years in the league and still look like they have some juice.

They’re also playing a major role in developing some of the younger players, who are trying to figure out how to create the resilient and tenacious identity every defense talks about wanting.

After beating the New Orleans Saints on Saturday night at NRG, head coach Lovie Smith addressed the media Monday morning and said he thought his defense accomplished some goals but still has work to do.

By Tuesday, the Texans will have to cut their 90-player camp roster to 85. On Monday, they released veteran defensive end Jordan Jenkins, who had been on the physically unable to perform list with a calf injury.

“We put an emphasis on takeaways. We have a goal of three each game," Smith said. "We were able to get that. We didn't score a touchdown. Third downs were not as good as we would have liked, but I thought the guys played hard, throughout too, with effort, which we were looking for, and the situational football, two-minute, we had to get them stopped at the end to get the ball back for our offense. Defensively, we were able to do that."

Smith mentioned a couple of guys that stood out Saturday rushing the passer.

“When you have certain guys that get reps that haven't played a lot, of course Obo (Ogbonnia Okoronkwo),” Smith said. “He’s been a good football player in the league. I liked some of the pressure we were able to get with our defensive line.”

The Texans have 15 defensive linemen in camp and whether it’s their fifth-round pick, defensive tackle Thomas Booker or an undrafted rookie like Odeleye Adedayo making plays, it’s going to make Smith and the coaching staff’s job that much tougher to trim the roster.

“You want that to happen," Smith said of the competition. "In fact, too, like Derek Rivers, guys that haven't gotten a lot of reps, when the lights come on, they really perform that way. But on the defensive line, we need a lot of guys. We need about 10 that we feel comfortable with this time right now, 10 or 11. The more the better. We know that Jonathan (Greenard) would be one of those players, Jerry Hughes. I could give you a few of the guys, Maliek Collins and some of them, but again, we're still trying to develop that 53.”

The Texans sacked Saints quarterbacks five times Saturday. It’s a small sample size of a few weeks of camp and a preseason game, but a step in the right direction in year two of a Lovie Smith defense.