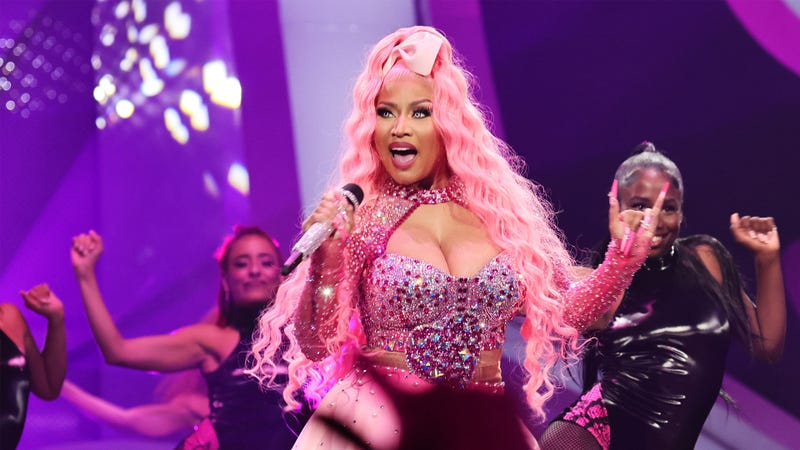 Her music is everything, we owe her everything, She is EVERYTHING! Nicki Minaj just slayed her Video Vanguard Award performance.

After not attending the VMAs for a few years, Nicki more than made up for it, giving us BIG Barbie Tingz energy and taking us down memory lane with some of her biggest hits.

Minaj transformed the VMAs stage into her very own Barbie dream house, matching her Barbiecore outfit, of a bedazzled corset with crystal-covered sleeves, a pink skater skirt, black platform boots and a bubblegum-pink wig.

The icon closed out her performance with her latest single and first solo number 1 track, “Super Freaky Girl.”

Following her performance, the rapper received a tribute from her Barbz, five of which adorably and excitedly presented her with the Video Vanguard Award in person.

While accepting the award, Nicki shouted out and thanked the rappers and musicians that she worked with throughout her career, including Beyoncé, Drake, Lil Wayne, Kanye West, Rihanna and Mariah Carey.

Never one to write down an acceptance speech, Minaj admitted that earlier in the day she felt compelled to jot a few things down.

“Let me tell you something … I never, ever in my life have written a speech, and today I jotted something on my phone … first of all, to everyone in here, thank you and God bless you,” she started off part.

“This was in my spirit to say. I wish that Whitney Houston and Michael Jackson were here," she said, later including rappers Pop Smoke, Juice WRLD, and Nipsey Hussle, as well deceased members of her family and inner circle. "I wish that people understood what they meant and what they were going through. I wish people took mental health seriously, even for the people who you think have the perfect lives.”

We Love You Nicki!