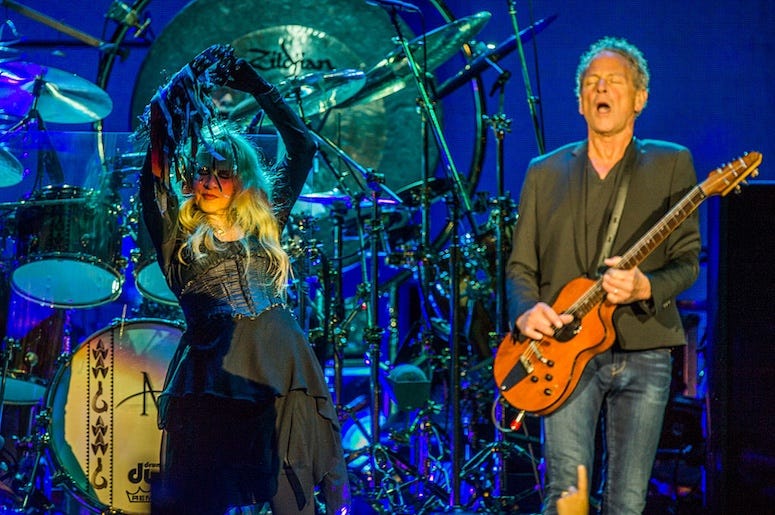 Unless you’ve managed to avoid the internet for the past couple of weeks, (which if you did, bravo!), then you’re well aware of the resurgence in popularity of Fleetwood Mac’s hit song “Dreams.”

It all started on TikTok when Nathan Apodaca uploaded a video of himself skateboarding and sipping on cranberry juice while the Fleetwood Mac classic plays in the background. Since then, both Stevie Nicks and Mick Fleetwood have gotten in on the action by creating their own versions of the video.

As “Dreams” has taken over the world once again, it leads us to a simple, yet complex question. Is it the best song on Rumours?

Let’s take a look at a song-by-song breakdown of the landmark Fleetwood Mac album and find out.

Given the, well, rumors surrounding the drama that existed between Fleetwood Mac members at the time, “Second Hand News” sets the tone for the album and addresses it right away. “I know there’s nothing to say / Someone has taken my place,” Lindsey Buckingham sings in the opening verse.

While the melodies of the song may take you away to a dreamy, vibey place, the lyrics of the song tell another story. The Stevie Nicks penned tune tells the story of someone trying to process the separation from a loved one all while hanging onto the hope their relationship will prevail. Remarkably, the rest of the band wasn’t a fan of the song when they first heard it.

The song has only a few lyrics, but they’re quite powerful. “She broke down and let me in / Made me see where I’d been,” opens the first verse. The song features gorgeous guitar playing that accompanies the lyrics about rebounding after a tumultuous breakup.

The song may be the most positive one on the entire album encouraging those listening to “don’t stop thinking about tomorrow.” Christine McVie wrote the song after her separation from John McVie and offers a positive mantra for anyone going through a difficult time.

Go Your Own Way

The first hit from Rumors was released as the first single from the record and spent a total of 11 weeks in the top 40 of the Billboard Hot 100 chart. Written by Lindsey Buckingham, the breakup song is directed at Stevie Nicks.

The Christine McVie written ballad is one of the most beautiful songs on the record. Addressing the sacrifice individuals make in a relationship, McVie touches on how the beauty stemming from a loving relationship makes the sacrifices worth it.

Remarkably, this was the only song on the record that each five members of Fleetwood Mac had songwriting credit on. Appropriately, the song can be interpreted in two ways. A bond that keeps a relationship going or the chain that binds together. However you interpret it, it’s one of the most powerful songs the band has ever put out.

The fourth and final single off of Rumours, the song was inspired by an affair Christine McVie had with the band’s lighting director. At the time, McVie told her then-husband John McVie that the song was about her dog. Even though its foundation is from a darker place, the lyrics do convey a positive tone.

I Don’t Want to Know

The uptempo track is tinged with a Country sound. Despite being written before Stevie Nicks and Lindsey Buckingham broke up, the song examines the end of a relationship and fits with the overall theme of the record.

The Christine McVie song has a bluesy element to it with the meaning left up to interpretation throughout the years. Some see it as a person who feels dependent on their lover while not feeling worthy of them. Others see it as a desire to leave a relationship, but tracking the strength to do so.

In an interview, Stevie Nicks called the song “my kind of symbolic look at somebody going through a bad relationship, doing a lot of drugs, and trying to make it.” A hauntingly beautiful song, it was reportedly recorded at the appropriate hour of 4 AM.