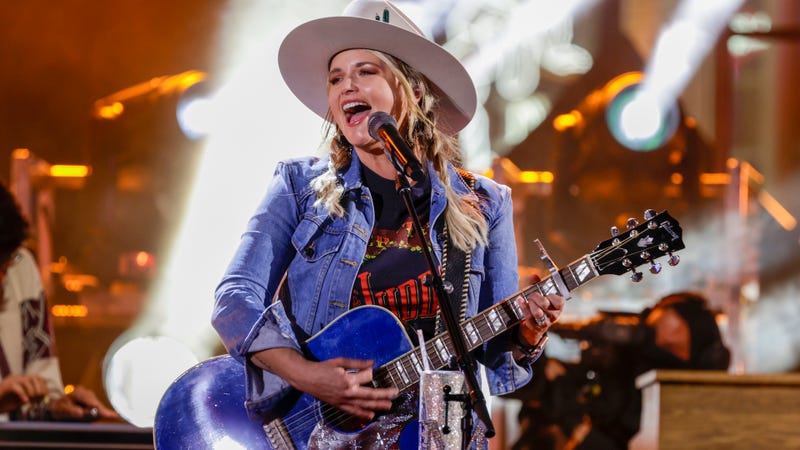 Centered around a gypsy lifestyle and adventurous spirit, the project is intended to take fans on a one-of-a-kind trip throughout the U.S. after an extended period of confinement throughout the pandemic.

“This record makes me want to drive, it’s like a driving record,” Miranda shared. “It takes you places. There’s some really heartfelt Country moments on it, there’s some feisty moments… I always try to have a little bit of everything. The whole vibe across the board is freedom… It’s really free.”

LISTEN NOW: Miranda Lambert shares the hopes she has for fans while listen to Palomino

She concluded, “I want people to have the freedom vibes and get in your car and drive, take some risk, do somethin’ fun.”

Saddle up and get ready to take a trip as Miranda shares stories behind the songs and more!

“’Actin’ Up’ felt right for the first song… It sort of eases you into this journey… I thought, ‘Let’s get people in from like the first note, the first line of the song, especially the first line of a record, that’s important. You can lose people quick!”

All about a journey to forget about a special someone, Miranda, along with songwriters Luke Dick and Natalie Hemby take listeners on an adventure, describing all the “Scenes” and characters they meet along the way. From “Dwayne south of the 10,” to an old hippie named ”Katie with a K” there’s never a dull moment.

“To have ‘In His Arms,’ that’s my ‘Easy From Now On,’ [by Emmylou Harris] feel. That’s what I get from that song — that Emmylou Country. If I could get as close to an Emmylou Harris Country song as I could, I think ‘In His Arms’ is that one.”

“We were constantly like, ‘Well, we’re not trying to chase 'Jolene,' obviously. So let’s just say Jolene because we can’t be Dolly [Parton] and we can’t be that song. But we wanted to ode to it because Geraldine wishes she was Jolene, but she’s never gonna be that cute. And we knew that upfront.”

“It is a very important song on the record. I mean, #1 it was the very first song we wrote for this record really with a vibe in mind. And #2, I don’t feel like I’ve really gotten to do that [be a tourist] that much in my life. I tour, I don’t get to be a tourist.”

“'Music City Queen' was born from the Cumberland and the [General Jackson] Showboat. We wanted to write about like a not-so realistic or glamorous part of Nashville. So what better than a showboat on the river? Every time I hear that song, and when the B-52’s come in I like, giggle with so much joy when he’s like ‘It’s a showboat baby!’ I’m like ‘This is awesome! How much more fun can you have on tape?!”

“I think ‘Strange’ is permission to just, let go for a sec. It kinda got out there in the verses, I felt like it was a little out-there and crazy and sayin’ ‘take what you will from it’… I was really wanting’ the chorus to just lift, like literally and just the emotion of it… wanted it to go into a happy place. I think we all felt that.”

“I love ‘Wandering Spirit.’ I’d already heard it a long time ago and thought it was so cool… I knew the song existed and I knew what it was about and I just never would have thought to like, cover it, or that I could even find a way to do it in my style… If it wasn’t a cover, we probably would’ve named the whole thing ‘Wandering Spirit' because it just really encompassed with what we were trying to do. Of course Mick Jagger did it better!”

“We went to a heart place with this song. Like this big, bold love song… That track is just so in your face and bold and we have references to ‘Roses in the Snow’ [by Emmylou Harris] in it and like, hidin’ your bottle in your boot, and all these cool visuals of like, little details of this journey into big love.”

10. That's What Makes the Jukebox Play

“This song gives me big time nostalgia feelings. Like there’s some sort of Brooks & Dunn thread in it or ‘90s Country vibes.”

“Writing ‘Country Money’ with two guys was real fun… We just started talking about how you make Country money. You know — farming, start there. And then Aaron [Raitiere, songwriter] was like, ‘Why don’t we make ‘em all women?’ And I was like, ‘Yes! We have to make them all women!’ So I started picturing my friends. Like, Caylee Hammack in her ‘Coop de Ville’ with all her chickens and Ashley McBryde gettin’ out of her truck with her own cattle ranch…. I know these people. They may not be farming a cattle ranch, but they are doing what it takes to get to the top.”

“I was already pretty much done writing for Palomino, but we were still cutting… it was beginner’s luck because it was the first time we [Miranda and Jesse Frasure] had ever written together, it was just us two and I was like, ‘Man! This song fits this [record’s] vibe too!’ It was kind of the cherry on top, I guess and it was something that I was missing feel-wise.”

Continuing on her theme of travel, Miranda sings about the Texas town of Waxahachie. Confiding in the town like a longtime friend, Lambert longs to return for some comfort and nostalgia. The chorus sings, “Waxahachie, are you still on 35? / Are you still an all-night drive from Louisiana? / Waxahachie, I can be there by 4 a.m. / Looking for a long-lost friend / That's what you've always been / Waxahachie / Ooh, Waxahachie.”

“If I had to give someone one song off the record, and just say ‘Take a guess at what this album is about,’ that song sums it up. There’s a lot of chasin’ goin’ on in this record. Chasin’ down dreams, chasin’ down lovers, chasin’ down old life, chasin’ down money, chasin’ down happiness. So, definitely ‘Pursuit of Happiness’ is a good sum up of what we’re tryin’ to do here.”

“I think Carousel is bittersweet…. We took some nuggets from our surroundings to make that song very real… It’s sort of permission to move to the next phase, and that it’s OK that the circus leaves town because it does, at some point for everyone.”