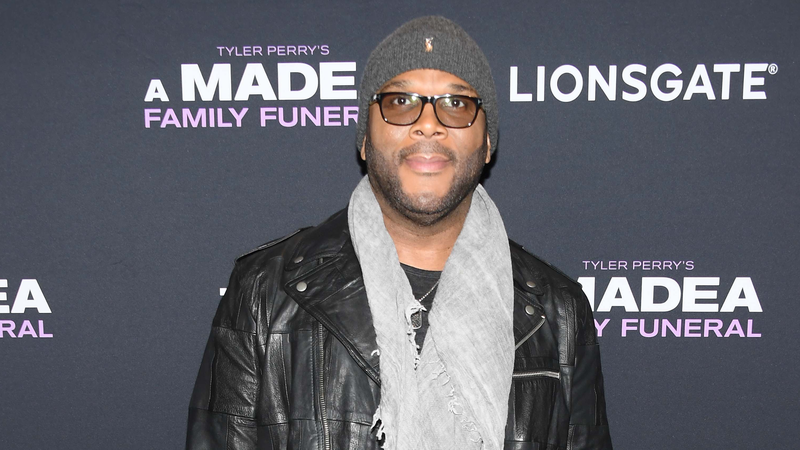 We already knew Tyler Perry was among entertainment’s elite, but just in case maybe you didn’t, we’re here to let you know he also holds a title of marketing genius.

Popcorn-flavored Pop for you — Listen to Audacy's See You At The Movies Radio now.

Using the hype around the star-studded Super Bowl LVI Halftime Show to hype up his upcoming Netflix movie, A Madea Homecoming, Tyler, no stranger to a deceivingly good disguise, "dressed up" as "MADEA J BLIGE," sporting that sparkly Super Bowl ensemble.

Yes, after repeatedly stating that he was finished with portraying the elderly grandmother with an attitude, Perry decided that Mabel "Madea" Simmons had one more story to tell. And his marketing strategy to promote her supposed final bow may have been worthy of a crown, or should we say frown.

As for Madea J. Blige, here’s what she had to say — “I rocked the Super Bowl! Thank you to all my 10’s of fans. I was performing in the parking lot cause I think they was jealous. I had this out fit first and they made Mary’s with the little fabric they had left. She think she the only queen of hip hop soul, but I showed them. God mad a way. I rocked it! I mean. I rocked the car I was standing on but you get the picture. These pictures are from me performing my song about someone I miss. It’s called No More Obama.”

Obviously with the post's proper pop culture timing and high level of hilarity, the comments section popped off, with fans expressing just how funny it was.

“I’m sick of you!”, one jokingly wrote. While another said, “But why I just hollered out so loud! Tyler Perry you play to much.”

“I never comment but Tyler!!! Madea has officially taken me out this morning,” replied a fan. As another, again joking of course commented, “Somebody take Tyler’s phone! Neeoooewww!!!”

Also coming in hot like Kanye with a comment in all caps, someone wrote, “I. JUST. DIED. ABSOLUTELY THE FUNNIEST THING I HAVE EVER SEEN. YOU MR. PERRY ARE A ONE OF A KIND GENIUS!!”

Anyway, jokes aside, be sure to check out A Madea Homecoming when it premieres on Netflix February 25.