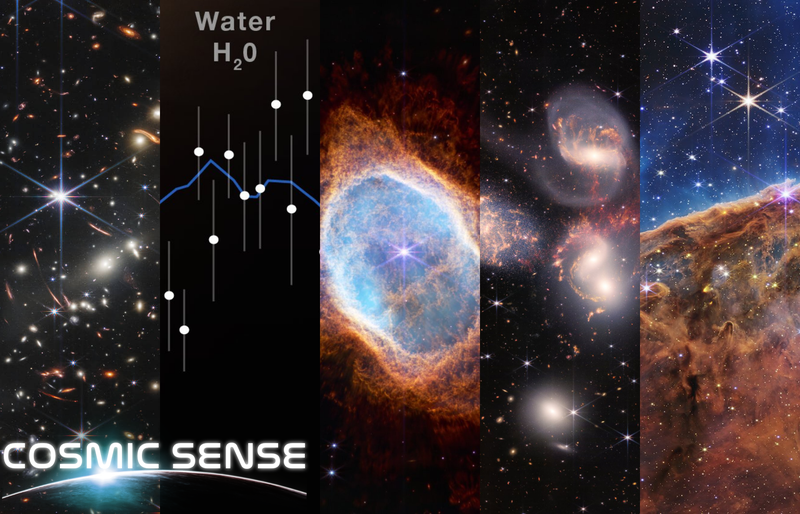 In the increasingly divided society we currently live in, you might wonder, what does anyone truly have in common? Though we all have differences, there’s one commonality that has prevailed for all of humanity: we are all floating on a rock, flying through outer space at over a million miles an hour.

Up until 100 years ago, the universe was thought to be a relatively small place. Humans weren’t even aware that other galaxies existed. Today, scientists estimate there are over 100 billion galaxies in our universe, with some studies suggesting there could even be up to 2 trillion﻿.

At last, here are the first full-color, science-quality images from the James Webb space telescope. 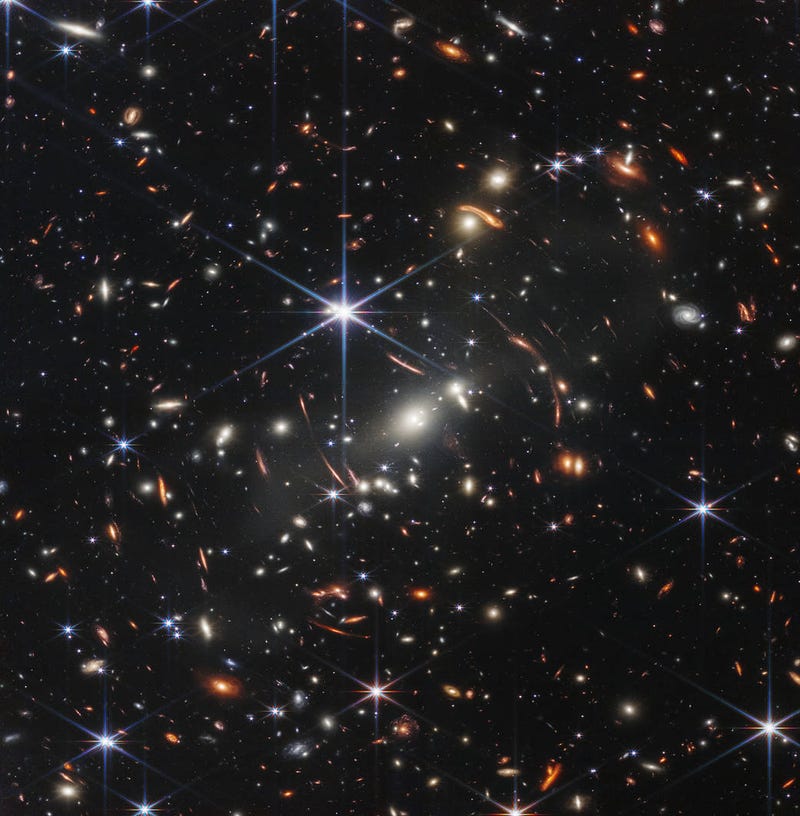 During a White House event, NASA gave the world a sneak peek at the first full-color images and released 'Webb's First Deep Field,' a photo of galaxy cluster SMAC0723.

If you held a grain of sand up to the sky at arm’s length, that tiny speck is the size of Webb’s view in this image. Imagine — galaxies galore within a grain, including light from galaxies that traveled billions of years to us! 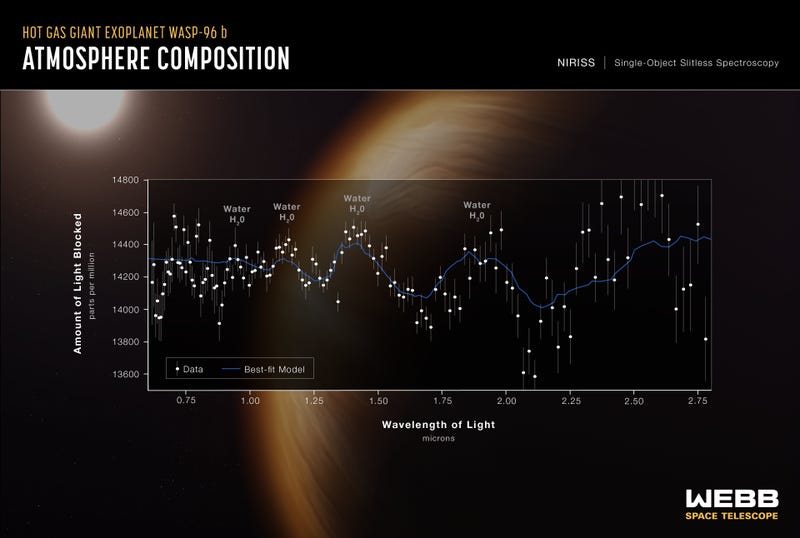 "Webb spotted the unambiguous signature of water, indications of haze & evidence for clouds (once thought not to exist there)! This is the most detailed exoplanet spectrum to date." - @NASAWEBB on Twitter

Think of spectra as barcodes. Here, each line represents a different molecule or element in WASP-96 b’s atmosphere. Spectroscopy 101: https://t.co/2lZDlDXGCQ

(The background illustration, based on what we know of WASP-96 b, is not a Webb image of the planet or its atmosphere.)

Webb captured this light curve of the brightness of WASP-96 b’s parent star over time. As the planet transits the star’s disk, its light dims. Though aspects of WASP-96 b were known, Webb data adds more detail to existing measurements. We can use transits to find new planets too! pic.twitter.com/zU210KY5h3

This photo of NGC 3132, informally known as the Southern ring nebula, reveals a dimmer star at the center of the nebula cloaked in dust.

The Southern Ring nebula is a planetary nebula. (Despite “planet” in the name, these aren’t planets — they're shells of dust and gas shed by dying Sun-like stars.) The new details from Webb will transform our understanding of how stars evolve and influence their environments.

For comparison, the photo below is the same nebula as captured by NASA's Hubble space telescope in 1998. 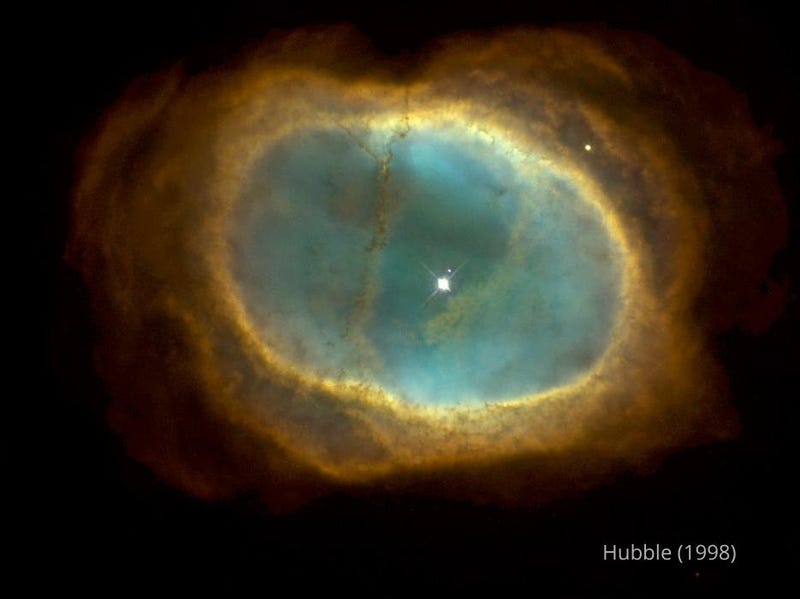 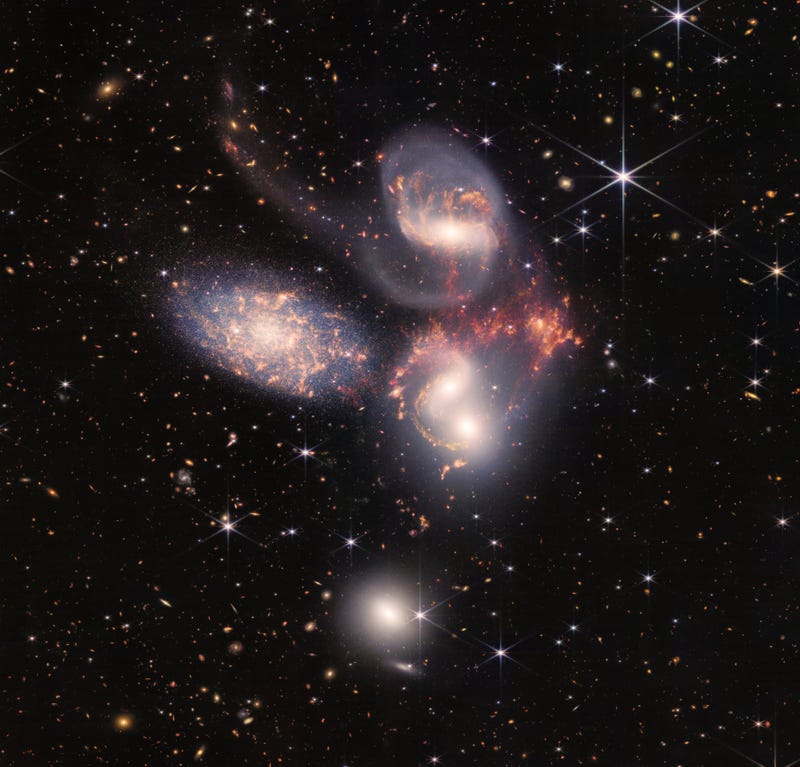 Stephan's Quintet is a visual grouping of five massive galaxies. This enormous mosaic is Webb's largest image to date, according to NASA, and covers about one-fifth of the Moon's diameter in the sky. The photo boasts over 150 million pixels and is made up of almost 1,000 separate image files.

In Webb’s image of Stephan’s Quintet, we see 5 galaxies, 4 of which interact. (The left galaxy is in the foreground!) Webb will revolutionize our knowledge of star formation & gas interactions in these galaxies: https://t.co/tlougFWg8B #UnfoldTheUniverse pic.twitter.com/b2kH1tSyMs

Galaxies collide in Stephan’s Quintet, pulling and stretching each other in a gravitational dance. In the mid-infrared view here, see how Webb pierces through dust, giving new insight into how interactions like these may have driven galaxy evolution in the early universe. pic.twitter.com/3P15LMCCOH 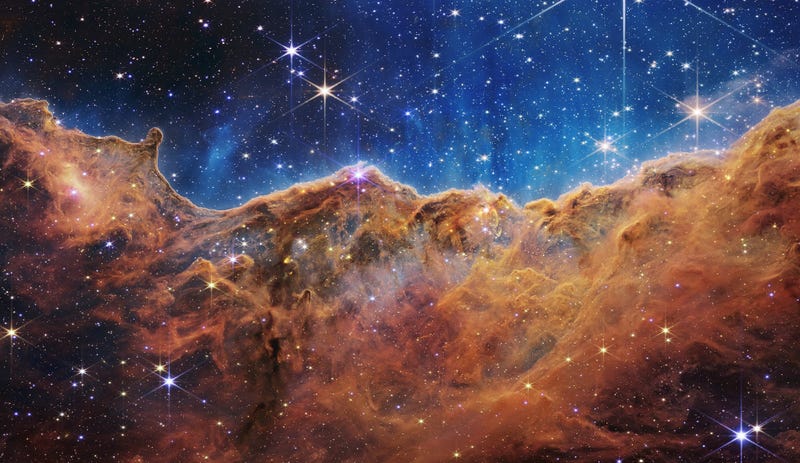 This breathtaking photo of Carina Nebula gives a perspective that humans have never seen, revealing previously invisible areas of the birth of young stars.

Known as the Cosmic Cliffs, the landscape of what looks like mountains are speckled with glittering stars and is essentially a stellar nursery. Some of the "peaks" span up to seven light-years high.

Two cameras are better than one, as seen in this combined view from Webb’s NIRCam & MIRI! In the near-infrared, we see hundreds of stars and background galaxies. Meanwhile, the mid-infrared shows us dusty planet-forming disks (in red and pink) around young stars. pic.twitter.com/yl9vHNAiuB