Jeter won his first World Series in 1996, the year he was also named the American League Rookie of the Year. The Yankees went on to win three straight between 1998 and 2000, only losing one World Series game in that span.

The Captain won five World Series with the Yankees, but there are a few defeats that still gnaw at him. Jeter’s storied career is set to be revisited during ESPN’s seven-part docuseries “The Captain” directed by Randy Wilkins.

New York was one win away from its fourth straight World Series after taking a 3-2 series lead in 2001. However, the Diamondbacks won a blowout in Game 6 and came from behind in the bottom of the 9th to win Game 7. Luis Gonzalez’s walk-off single off Mariano Rivera floated over the drawn-in Jeter’s head.

The Yankees looked poised to return to the World Series in 2004 after losing to the Marlins in 2003. They held a 3-0 series lead in the ALCS, but, as we all know, the Red Sox broke their curse.

“He didn’t even talk about it at one point. I was like ‘Naw man, we gotta talk about it. We gotta keep going,’” Wilkins laughed.

Those are two key losses that Jeter may never forget.

“I think the emotions are still very raw to him. He’s not a super-emotional guy so he’s not going to be crying, all demonstrative, that’s just not his nature,” Wilkins said.

“But you can tell that some of those losses really, really gnawed at him. He didn’t forget them. He won’t forget them. It has a very specific impact on how he feels about things.” 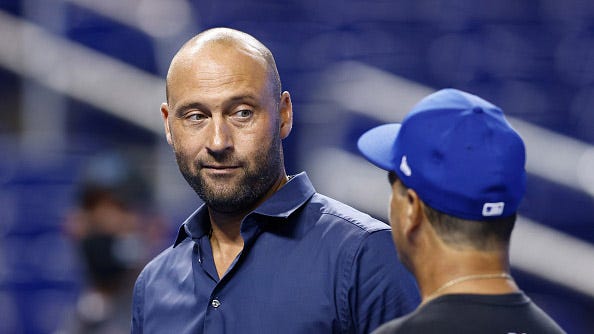