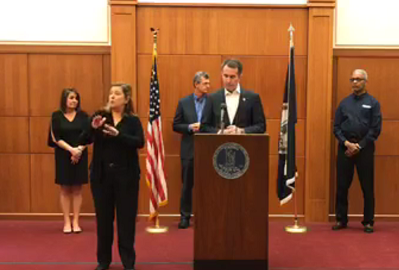 Richmond, Va. (Newsradiowrva.com) -  The Virginia Health Department is walking back comments made by Health Commissioner Norman Oliver to the Richmond Times-Dispatch.  Oliver was quoted, following the release of Governor Ralph Northam's Reopening Blueprint, as saying, “I, personally, think Phase One will be a two-year affair...there are a lot of people working on this, and I hope they prove me wrong, but I don’t see it happening in less than two years.”

Phase one consists of continued social distancing, some reopening of businesses, telework, and masks will be recommended.  After being asked by WRVA Friday night to clarify the quote, a VDH spokeswoman said, "Dr. Oliver intended to say that the Commonwealth will likely be dealing with COVID-19 in some form until a vaccine is produced, not that Phase One itself would take two years."

There have been protests to reopen the Virginia economy, and Republicans have sent Northam a letter asking for some limted reopening.  The Governor said Friday that Phase One could begin May 8th if hospitalizations and cases have been trending downward for 14 days.