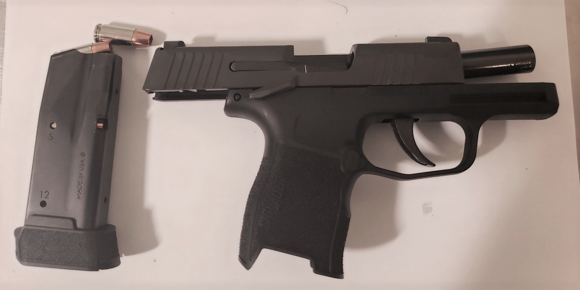 RICHMOND, Va. (NewsradioWRVA.com) – A Yorktown, Va., man was cited by the police after Transportation Security Administration officers at Richmond International Airport caught him with a loaded handgun in his carry-on bag. The 9mm handgun was loaded with 12 bullets, including one in the chamber.

It was the third gun caught at the airport so far this month and the ninth handgun that TSA officers have caught at the security checkpoint this year.

TSA officers stopped the man when his carry-on bag triggered an alarm in the security checkpoint X-ray unit. Upon spotting the weapon, TSA alerted airport police, who responded to the checkpoint, confiscated the handgun and cited the man on a weapons violation.

“In addition to being cited by the police, this individual also is facing a stiff Federal financial civil penalty, which could run into the thousands of dollars,” said Robin “Chuck” Burke, TSA’s Federal Security Director for the airport. “Airports are crowded with travel volume as high as it has been since the start of the pandemic and bringing guns and other prohibited items to a security checkpoint slows down the line for everyone.”

Passengers are permitted to travel with firearms only in checked baggage if they are properly packaged and declared at their airline ticket counter. Firearms must be unloaded, packed in a hard-sided locked case, and packed separately from ammunition. Then the locked case should be taken to the airline check-in counter to be declared. TSA has details on how to properly travel with a firearm posted on its website.

Bringing a gun to an airport checkpoint carries a federal civil penalty because TSA reserves the right to issue a civil penalty to travelers who have guns and gun parts with them at a checkpoint. Civil penalties for bringing a handgun into a checkpoint can stretch into thousands of dollars, depending on mitigating circumstances. This applies to travelers with or without concealed gun carry permits because even though an individual may have a concealed carry permit, it does not allow for a firearm to be carried onto an airplane.