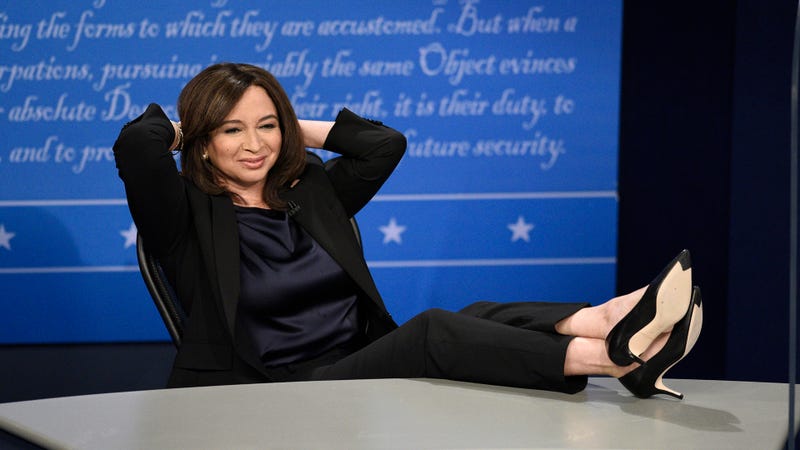 LISTEN: Fly on the Wall with Dana Carvey and David Spade: Maya Rudolph

Throughout the years, the hosts remember always having great experiences whenever Maya was in the room, whether during their shared SNL days or at local comedy clubs. That's a sentiment Rudolph shares, and has applied throughout her professional life: "If it's not positive, I'm not interested," she admits.

"I know it sounds trivial, but that's actually a big element for me," Maya says. "I noticed that I was the dork that, when people would say, 'who was your favorite host on SNL?' ... I would always say, I was such a sucker, I was like, 'well so-and-so was really nice.' If someone was really nice, I'd like 'em. I didn't care really if they were funny... If they were a kind person, I was like, 'You know what? They were really great, I really enjoyed that.'"

"It's a real comedy turn-on for me, I really like it" she adds. "I don't like when people are mean or snarky. It's not enjoyable for me... it makes my butthole tight, in a bad way."

Watching her Saturday Night Live impressions of Vice President Kamala Harris, Carvey noted the "joyful" way in which she portrayed the nation's first female VP. "I actually said that to her," Maya says. "It's powerful; she's so powerful, and it's really exciting. So, all the things that draw me to her were the things that I was, probably in the back of my mind, trying to emulate when you see someone that's exciting... that's why Beyoncé is so fun! Because I wanna be Beyoncè, I wanna play dress up."

Listen to the full episode featuring Maya Rudolph -- now playing on Audacy -- as Cadence13 invites you to be a Fly on the Wall with Saturday Night Live alumni Dana Carvey and David Spade, behind the scenes as they reminisce about their most memorable stories and moments with friends of the show. In each episode, you’ll hear from your favorite cast members, hosts, writers, and musical guests as they share never-before-told stories about their careers.

For Maya's latest project, she plays Molly Novak, a billionaire ready to save the world, in her brand new comedy series Loot -- now streaming only on Apple TV+. Check out the trailer above.