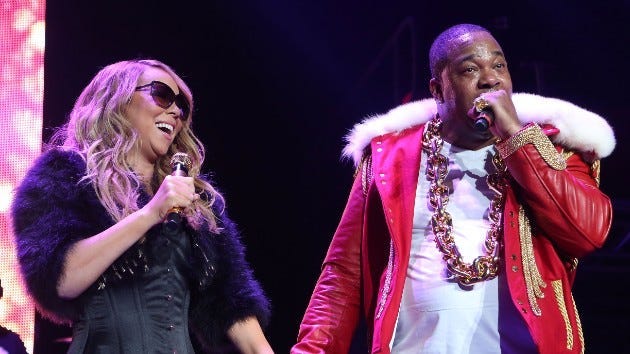 Busta Rhymes and Mariah Carey created a hit with their 2003 collaboration, "I Know What You Want," but apparently someone else was originally supposed to sing the male vocals.

In a new YouTube documentary titled Divine: The 18 Year Anniversary Celebration, Busta, Mariah and others reflected on the song and video for its 18th anniversary.

Busta recalls being sent a beat from producer Rick Rock while on a tour bus with his hype man, rapper Spliff Starr, who called it "genius."

"I reached out to [Mariah], she told me to send it, and I told her that I sang the reference to the hook on the song, and I wanted to just give her an idea of what I think she should be doing," he explains.

Busta admits that he originally wanted a male R&B singer to exchange vocals with Carey on the track, but she "insisted" otherwise.

"Yes, Busta was singing and I remember going like, 'Do you want me to sing this part over? Or...like 'is he keeping that part?'" Mariah recalls. "Because at that time, rappers weren't really doing the singing thing, but I loved it."

Divine: The 18 Year Anniversary Celebration also features interviews with rappers Rah Digga, Rampage, Baby Sham, Trippie Redd, video director Chris Robinson and actor Michael Jai White, the latter of which starred in the "I Know What You Want" video. The documentary also features behind-the-scenes clips and explains how the song led to Busta and Mariah's 2020 sequel, "Where I Belong."